How To Care For A Tillandsia Houseplant

The tillandsia genus of bromeliads contains hundreds of species. They offer a wide range of color, size and display options.

Tillandsias are found predominantly across a relatively wide climate band, ranging from the southern United States to South America. Spanish moss, or Tillandsia usneoides, is the curtain-like plant that drapes down from trees in the Florida everglades. The tillandsia name was created in honor of the famous seventeenth-century Swedish botanist Elias Til-Landz.

The majority of tillandsias are found in tropical rainforests but some live in arid deserts and others inhabit rocky hillsides. A significant difference between some tillandsia species and many bromeliads is that the relevant tillandsias can survive in slightly lower temperatures. While most tillandsia requires high humidity, similarly some of the air plants can survive with slightly lower levels of humidity than the pot-grown species.

Many tillandsia species have some form of conservation status in the wild now, as a result of the stocks having been over-harvested for commercial use in past decades. Tillandsia for sale in recent years have been grown from seed stock but views have been expressed that some of the hybrid varieties are showing signs of a gradual reduction in quality. 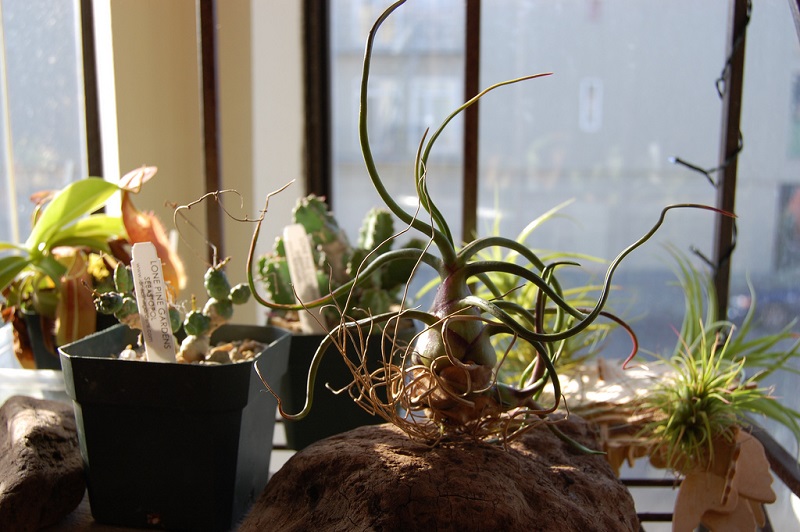 Tillandsia can be defined into two principal groups, the green or pot-grown tillandsias and the grey tillandsias commonly known as air plants. Air plant tillandsia houseplants are often grown on pieces of bark but there are many options, including the use of a bromeliad tree. The green or pot-grown tillandsias look like a normal houseplant but as they grow the blooms are brief but very distinctive, while the bracts are a striking feature throughout their active period, which is much longer than the flowering time.

While many commercial varieties are hybrids, the most common houseplant species include:

Tillandsia caput-medusae has distinctive spiraling leaves with blue or violet flowers when in bloom. The bracts can be brightly-colored. It is sometimes grown in small pots with care but is often displayed in a group with other air plant tillandsias.

Tillandsia ionantha is a typical air plant with grass-like tufts, though ionantha is particularly compact, usually only up to three inches tall with a pretty spiked flower. As the flower grows, the inside of the bract turns orange or red. This helps attract birds and other pollinators in the wild. 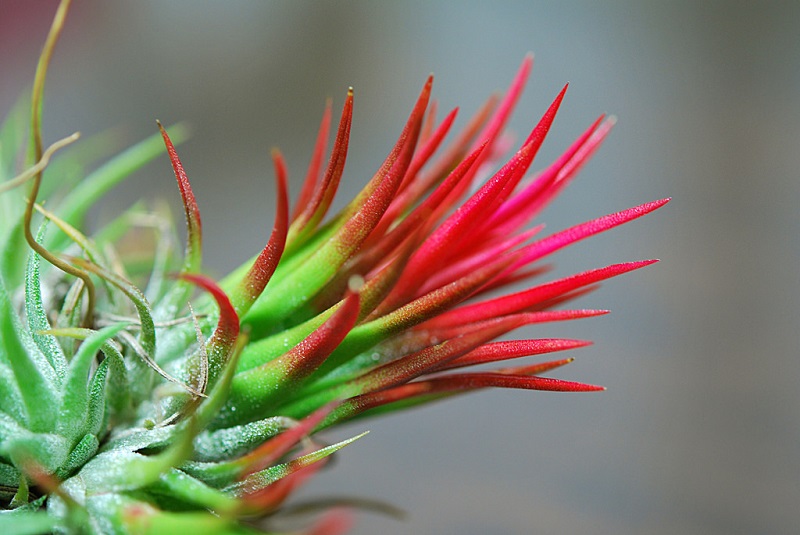 Tillandsia usneoides or Spanish moss. Though some enthusiasts grow this in greenhouses, it can be grown as a houseplant. It propagates easily in humid conditions. 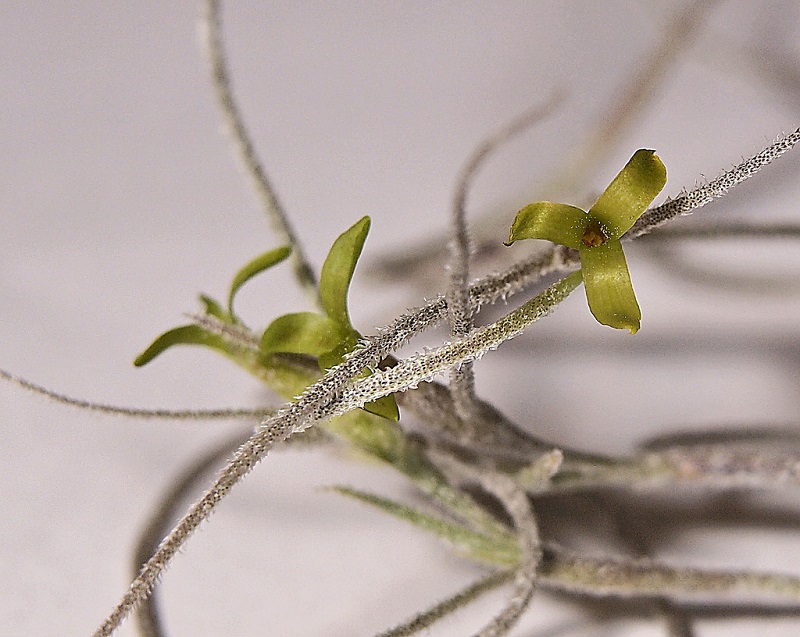 Tillandsia cyanea is the most common green tillandsia. Tillandsia lindenii is a taller version. 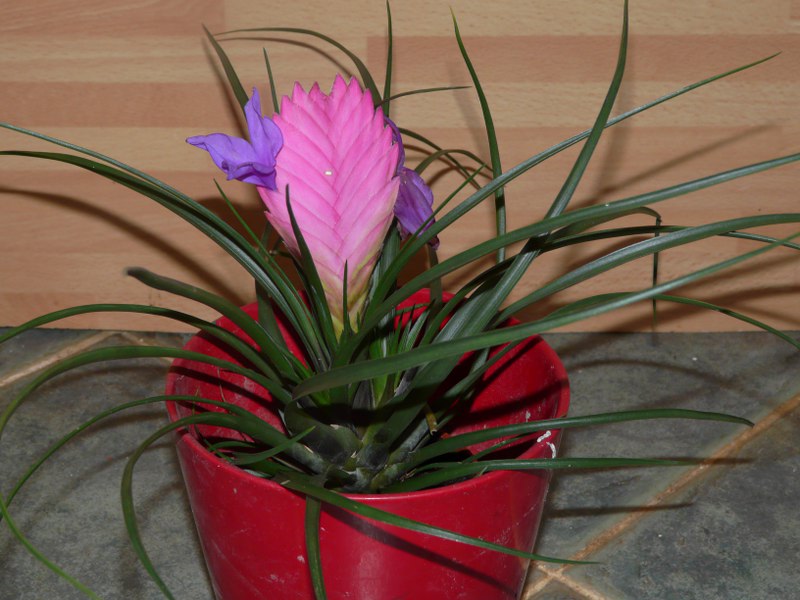 Tillandsia houseplants cover such a wide range, especially amongst the air plant types, that prospective keepers should research specific care requirements. By buying from reputable sources, information about the specific requirements should be available. There are some general guidelines that will usually apply:

Tillandsia display options are considerable and allow lots of scope for a creative approach. Group displays are one of the best ways of displaying tillandsia plants, though individual specimens are also interesting and attractive. Tillandsia, like many plants, can easily become a houseplant type that stimulates an enthusiasm to become an engaging specialist interest. 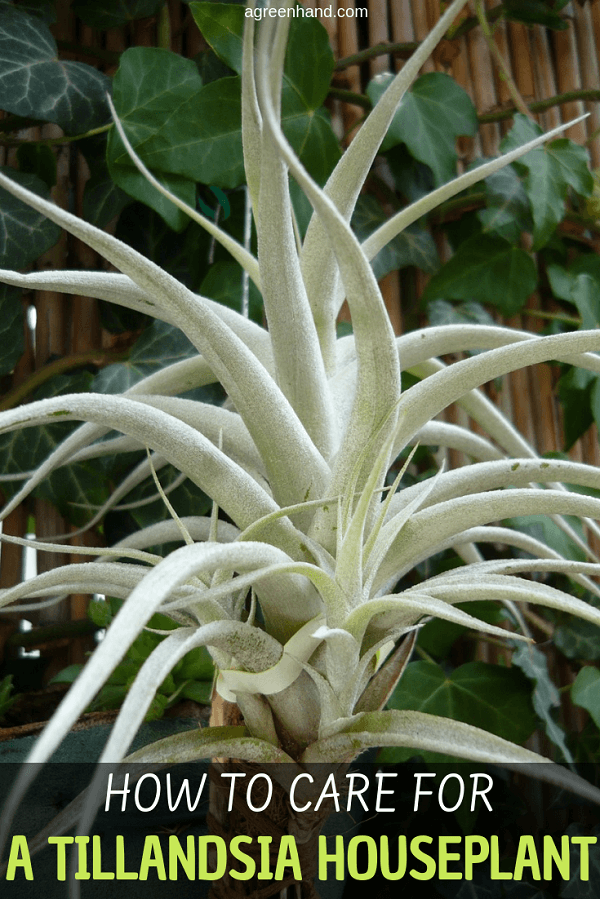