The Best ﻿Fertilizer Spreader For Your Lawn This 2023

Fertilizer application needn’t doing manually. Depending on the size of your property, using only your hands can take a lot of time and effort. Thus, it’s a more practical decision to use a fertilizer spreader. There are many of them available in the market, but we’ll help you find the best fertilizer spreader for your lawn with our comprehensive guide.

Top 7 Best ﻿F﻿ertilizer Spreaders For Your Lawn This 2023

The first fertilizer spreader we have has a three-year warranty, and three optional parts: hopper grate, hopper cover, and material deflector. All of these options are designed to improve the overall performance of the Agri-Fab 45-0463 Broadcast Spreader.

First, the hopper grates prevent any clumps from affecting the flow control opening. Next, the hopper cover protects the granular products from being spilled due to harsh winds or bumps during operations.

As for the material deflector, it mitigates the scattering of the product over walkways, driveways, and other unwanted section to reduce waste. 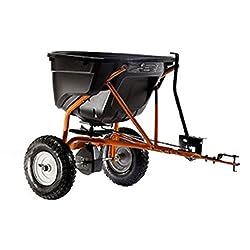 Next, we have the Earthway 2150 Commercial Broadcast Spreader. Its poly hopper can carry as much as 23 kilograms or 50 pounds of granular product, which should be enough to cover a decently sized area without a refill. It features a compact design that’s good for lawn owners with a limited storage space.

To improve the precision of the Earthway 2150 Commercial Broadcast Spreader, it employs what it calls the EV-N-SPRED 3-hole drop shut-off system. This system features a feathered spreading edge for a more accurate coverage. Likewise, there’s an adjustable handle and a T-Speed level for user convenience regardless of the operator's height.

This broadcast spreader is used in the seasons of spring, summer, and fall. The hopper of the Scotts Turf Builder EdgeGuard Deluxe Broadcast Spreader can accommodate up to 15,000 square feet of lawn care products. We didn’t have to spend so much time upon receiving it since this broadcast spreader is already pre-calibrated and ready to use upon arrival.

Additionally, the Scotts Turf Builder EdgeGuard Deluxe Broadcast Spreader has a control panel that allows you to modify the precision rate of the machine. This could improve the coverage performance. Since this is a Scotts fertilizer spreader, it has the EdgeGuard feature which covers off the right portion of the spreader pattern. This stops it from wasting the product on the non-lawn sections of your property.

Intriguingly, our fourth fertilizer spreader comes from Scotts too. It is touted as a spreader to be used all throughout the year to serve various purposes: feeding, seeding, weeding, and melting ice during the winter.

While the previous Scotts Broadcast Spreader can easily accommodate 15,000 square feet of lawn care products, this handheld-type spreader can understandably carry just up to 2,500 square of it.

Still, this battery-operated fertilizer spreader has a trick up its sleeve. Not only does this have the previously mentioned Edge Guard to reduce product waste, but it also has the Handy Lock technology. This acts as a trigger lock so that you don’t have to constantly press the Scotts Wizz Hand-Held Spreader while distributing granular products over your lawn.

This is a broadcast spreader with a remarkable 175-pound poly hopper carrying capacity. This amount is sufficient enough to cover a one acre or more lawn. The moment we received the Brinly BS36BH Tow Behind Broadcast Spreader, it came as quite sturdy. It features stainless steel hardware, and the gearbox is fully enclosed to keep the components safe.

The Brinly BS36BH Tow Behind Broadcast Spreader has the Directional Spread Pattern Control feature. As the name implies, its coverage and spread with can be controlled and determined by the operator.

This is another broadcast spreader from Scotts. In terms of the similarities, the Scotts Elite Spreader has a control panel for modifying the precision rate, and it also comes in pre-calibrated and ready to be operated from the get-go. As we expected from its name, it features the EdgeGuard technology to stop the fertilizer from being scattered over non-lawn sections.

What makes it different from the first two reviewed Scotts fertilizer spreaders is the ability to accommodate up to 18,000 square feet of lawn care products. Furthermore, the air-filled pneumatic tires of this spreader have been designed for better movement on different types of terrain. 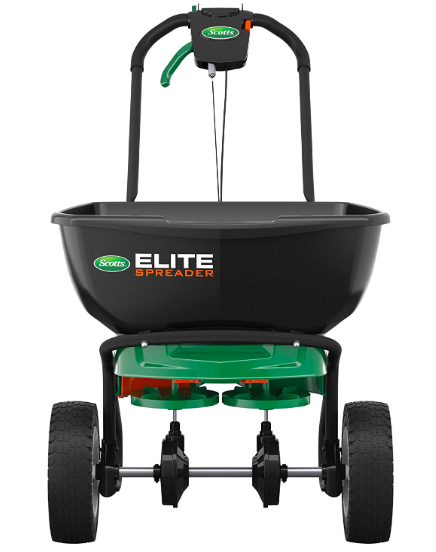 Finally, we have another guy from Scotts. This is made for small-sized lawns, and it comes fully assembled for immediate use. Whether it’s for seed planting or herbicide application, the Scotts Easy Hand-Held Broadcast Spreader is designed for usage throughout the year.

During winter, this is light enough to be carried and get rid of the accumulated snow on the pavement through the use of ice-melting products. Consequently, this broadcast spreader is rustproof and capable of carrying a maximum of 1,000 square feet of lawn care products.

Why Use A Fertilizer Spreader

A fertilizer spreader is meant to apply granular products over your lawn in an even manner. Why is it important to have a uniform fertilizer application? Well, unevenly laid down fertilizer can increase the risk of weed invasion, plant disease, and pest invasion.

Moreover, your plants will have differences in growth rates due to the uneven amount of nutrients they will receive. Not only can there be color variations among your plants but also distinctions based on root strength. Likewise, your lawn needs a sufficient amount of the active ingredients for the best growth speed. While summer and fall are the best periods to apply fertilizer, you also need to apply it during the winter to fortify your lawn against the harsh cold elements.

On a related note, a fertilizer spreader is not limited to fertilizer application. In fact, you can also use it to evenly distribute grass seeds and to manage ice melt located on pavements.

Before buying yourself a fertilizer spreader, you first consider the three types available. Being aware of their functions and compatibility with your property will help you save money – or at least allow you to spend it wisely.

This is unarguably the simplest type of fertilizer spreader. It’s light enough to carry with only one hand. Once you decide to use it on your lawn, your other hand can take care of the grinding process.

As you might have already expected, a handheld spreader is designed for relatively small properties. It can speed up the fertilizer coverage even if you are using your hands. While it has a small capacity compared to the other types, it’s affordable, convenient, and suitable for those with small gardens to tend to.

The third type of fertilizer spreaders is the tow-behind spreader, which is similar to the push fertilizer spreader since it is also a wheeled variant. Similarly, the spreading mechanism is activated once the wheels begin to turn.

One significant difference, however, is that the tow-behind fertilizer spreader has a large carrying capacity that makes it ideal for huge tracts of land. Furthermore, as the name implies, one need not push this spreader. Instead, it is meant to be pulled along a mower or an all-terrain vehicle (ATV). In addition, some two-behind spreader models have an aerating attachment, which allows you to accomplish two lawn maintenance tasks.

If you are looking for the best electric lawn mower, you can refer my post:

Aside from learning the differences among the handheld, pull, and tow-behind fertilizer spreaders, you must also know what you want in terms of precision. In this aspect, you should be able to distinguish a drop spreader from a broadcast spreader. Both of them have their advantages and disadvantages, so let’s read up on them. 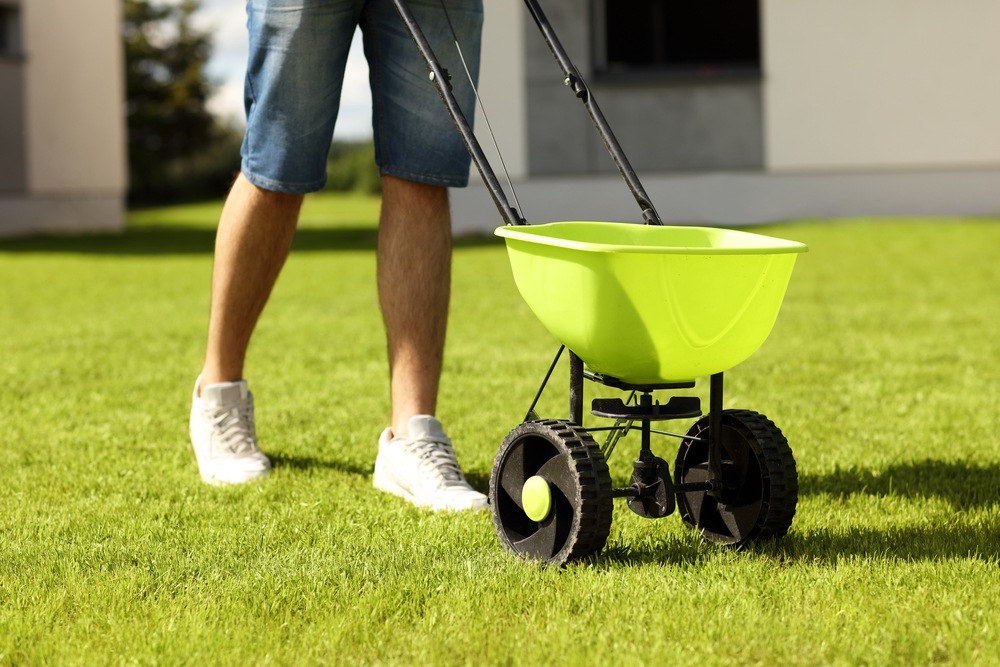 The main advantage of a drop spreader over the broadcast spreader is its precision. The application method here is dropping the product between the wheels of the machine. Thus, you can accurately manage where the fertilizer or herbicide is bound to fall over your lawn.

Consequently, the drop spreader is the ideal choice if you have a medium-sized property that utilizes garden rows. As the spreader moves in a straight path, the fertilizer or the grass seed is dropped down your lawn at a precise width. To ensure the even distribution, the wheels of the drop spreader need to overlap. Using this machine, you will easily know which parts of your lawn have been treated with the lawn care product.

Still, one disadvantage of this is its relatively small coverage due to the pattern it uses. If you need accurate product distribution for garden beds and rows, you are likely to make several passes to cover the entire property. In addition, you have to be careful when you use this spreader. If you drop too much of the product, the grass could burn or at least leave stripes. Misaligned passes could also leave some of your areas with insufficient fertilizer.

In contrast, this fertilizer spreader works by releasing the product on both the front area and the side sections of the machine using a spinning disc. The rotary mechanism typically has a spread radius ranging from three feet to four feet. Thus, it significantly has a bigger coverage area than a drop fertilizer spreader. If you want to cover a large or commercial property as fast as possible, this is what you should get.

While it does its job quickly, it cannot compete with a drop spreader in terms of precision. There are broadcast spreaders that feature a guard for usage even at the edge and corners of your property. Butt its mechanism can quickly lead to scattered products in unwanted areas such as on the pavement and on someone else’s lawn.

Additionally, you would have to pass over the same area if the spread distance is far from the broadcast spreader. If you don’t, the granular product might not be spread in a uniform manner.

In the end, our favorite fertilizer spreader is none other than the Scotts Turf Builder EdgeGuard Deluxe Broadcast Spreader.

Its hopper can hold up to 15,000 square feet of lawn care products, and it is an all-year spreader.

Thus, you don’t have to buy anything else if you need to spread grass seeds, apply herbicide, or conduct some ice-melting operations.

Despite being a broadcast spreader, we can still have accurate distribution due to the adjustable precision settings. Plus, it’s pre-calibrated and does not waste any of the granular products thanks to the EdgeGuard technology.

We hope that our guide helped you in making the right buying decision. A fertilizer spreader is a great tool to keep your lawn in top shape. If you have any queries, feel free to give us a comment.

2. How to use fertilizer spreader the right way?