How To Grow Sarracenia “Wrigleyana”

North American Pitcher Plants, Sarracenia spp., are large, hardy or half-hardy plants that are most often cultivated indoors or in cold greenhouses but can do well outdoors provided extreme temperatures are avoided. Sarracenia x wrigleyana is a naturally occurring hybrid that offers a combination of large size, rapid growth, impressive foliage, and hardiness to Zone 5. 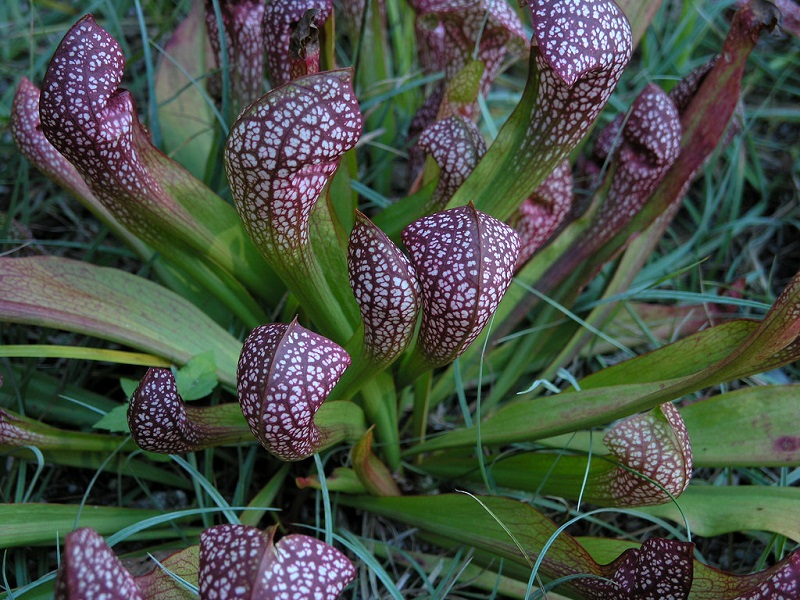 Sarracenia x wrigleyana is a hybrid between the Parrot Pitcher Plant Sarracenia psittacina and the White Pitcher Plant Sarracenia leucophylla. Its leaves have the narrow, incurved openings of the first species but the size and upright growth of the second species. Most plants have green leaves with red only at the tops, but the form known as Scarlet Belle has leaves that are more or less entirely red.

In common with other North American pitcher plants, Sarracenia x wrigleyana consists of a whorl of tall, trumpet like leaves. It is a large plant, with individual pitchers getting to between 6 and 12 inches in length, and mature plants may have as many as a hundred such leaves.

Although the pitchers are large, they have very small openings, and these plants aren’t especially good at catching insects. Sarracenia psittacina has similarly small openings to its pitchers, but its leaves lie recumbent on the ground, allowing small animals to simply walk into them, but Sarracenia x wrigleyana has upright leaves like its other parent, Sarracenia leucophylla, and so its insect catching efficiency suffers in comparison.

During the summer a single flower is produced on long stalks that rise well above the foliage. These flowers are bell-shaped and hang downwards, and the petals are usually purple in colour.

As with virtually all carnivorous plants, Sarracenia x wrigleyana must be watered with mineral-free water. Rainwater is the cheapest and easiest option, but otherwise distilled or deionised water could be used instead. Tap water, drinking water (including mineral water) and water from a domestic water softener are not suitable and should not be used.

Sarracenia x wrigleyana does well planted in pots with a 50/50 mix of peat and silica sand. Ideally, stand the pot in a tray or planter that can be partially filled with water at all times. This will keep the soil waterlogged and provide some beneficial humidity around the leaves, and so avoiding the leaves become dry or sunburned. If planted in a bog garden, it is crucial that the soil is kept wet during the summer especially: these plants will not tolerate dry soil for long!

Like most carnivorous plants, Sarracenia x wrigleyana prefers good, strong light, especially during the growing season. In the garden direct sunlight is ideal; if grown indoors, then put the plant on a sunny windowsill. Happy plants develop at least some red colouration on their leaves; plants that are not getting enough sunlight will be much greener.

Sarracenia generally are big plants, and finding a suitably sunny location indoors can be tricky. A conservatory would be ideal, and the plant should get at least six hours of strong, direct sunlight every day. Sunny windowsills can be fine, but in some cases the best approach is to overwinter the plant indoors when it is growing very much, but then put it outdoors between spring and autumn.

Sarracenia x wrigleyana is hardy to Zone 5. In North America this corresponds to latitudes about as far north as Chicago and in Europe as far north as southern Scandinavia. However, while tolerant of frost and even snow, Sarracenia x wrigleyana does need a bit of care to survive cold winters. Firstly, it should be in a pot that doesn’t allow deep ice to form at the top. Let the soil dry off a bit, and remove the tray or planter once it stars getting frosty so that the plant isn’t sitting in solid ice.

The other important thing to do is scatter a little straw or mulch on the soil. Once it gets cold, this will insulate the roots keeping the plant healthy through its dormant phase. So while the foliage will certainly die back, the roots will survive, ready to produce new leaves in spring.

Because it is a hybrid between two different plants rather than a true species, Sarracenia x wrigleyana will have to be propagated vegetatively. One easy approach is break away a young leaf with a bit of the rhizome (the horizontal stem) attached, put it in a jar that is partially filled with water, and then place the cutting somewhere sunny. With luck the cutting will produce some roots, and once these are an inch or two long, the cutting can be put into a pot with the usual 50/50 mix of peat and silica sand.

Alternatively, large plants can be divided. Remove the plant from its pot, shake away the soil, and use a sharp knife to cut the rhizome into two or more pieces. These can then be potted as required. 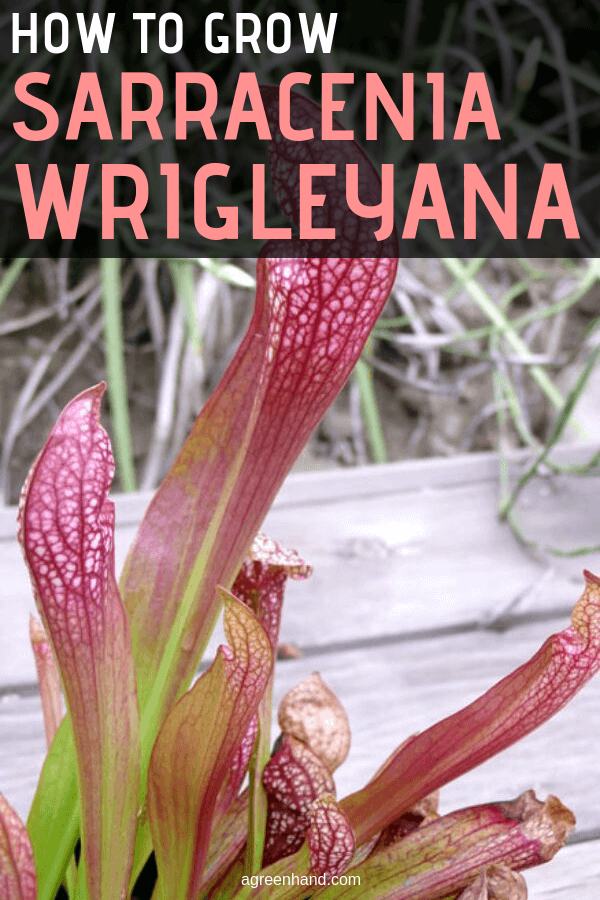