How To Grow And Care For Buddhist Pine

The slow-growing Buddhist pine inspires patience but is a tough houseplant worthy of its place in your home.

The Buddhist pine, Podocarpus, is actually a yew pine with origins in the tropical climates of Asia. Many plants that today are used as houseplants were brought to Europe and America during the nineteenth century by merchants and naturalists who collected specimens when their ships called at ports in China, India, and Japan.

When grown outdoors in Florida and Louisiana, the evergreen Podocarpus can grow to thirty feet with a spread of about twenty. Inside as a houseplant, the Buddhist pine is a sedate grower that likes filtered sunlight. In strong, direct sun the tips of the long and slender dark-green leaves will turn brown.

Starting off as a tall shoot, the Buddhist pine P. macrophyllus will develop horizontal branches that extend its growth until it is as wide as it is tall. The deep shade under the leafy canopy and its habit of broad rather than high growth is probably what prompted its association with the Buddha, Gautama Siddhartha, who lived in India in the fifth century B.C. and found personal enlightenment while sitting beneath a banyan tree, a species known for its thick trunk and spreading branches. 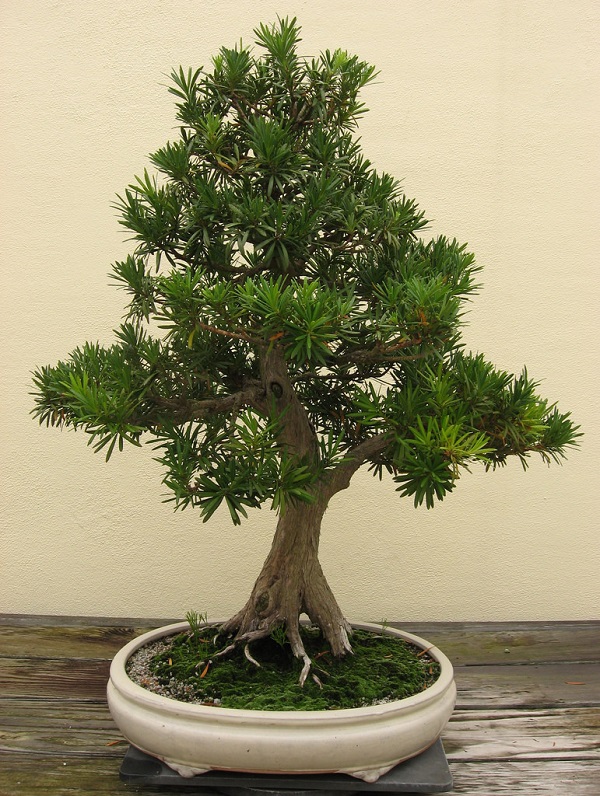 Care of the Buddhist Pine

Having a Buddhist pine in the house is likely to produce thoughts of warm, tropical places during a cold winter and cool, shady places on a hot summer day. The dense, dark green growth of the leaves when seen from above is awe inspiring. The plant can tolerate heat but dislikes cold night temperatures. Its soil should be light and well drained. New growth on branch tips will droop when the soil is too dry, so water moderately every week and give it extra water if the pot is located near a heat register during the winter. This plant doesn’t mind small pots and does not become root bound quickly, but watch for frequent wilt or water passing through the pot quickly. Both can be indications that a repotting is needed.

To remove dust from a Buddhist pine, give it a warm shower in the sink or pass a lamb’s wool duster over its bushy branches. If browned leaves are unsightly, the branch can be trimmed back. The entire plant can be pruned to a desired shape. When grown outside, Podocarpus is sometimes used as a hedge and is sheared.

No insects seem to bother the Buddhist pine, so the only extra care required is liquid plant food once a month or a plant food spike once a season. Pushing a food stick into well-watered soil on the first day of a new season is a good way to remember to feed any houseplant. 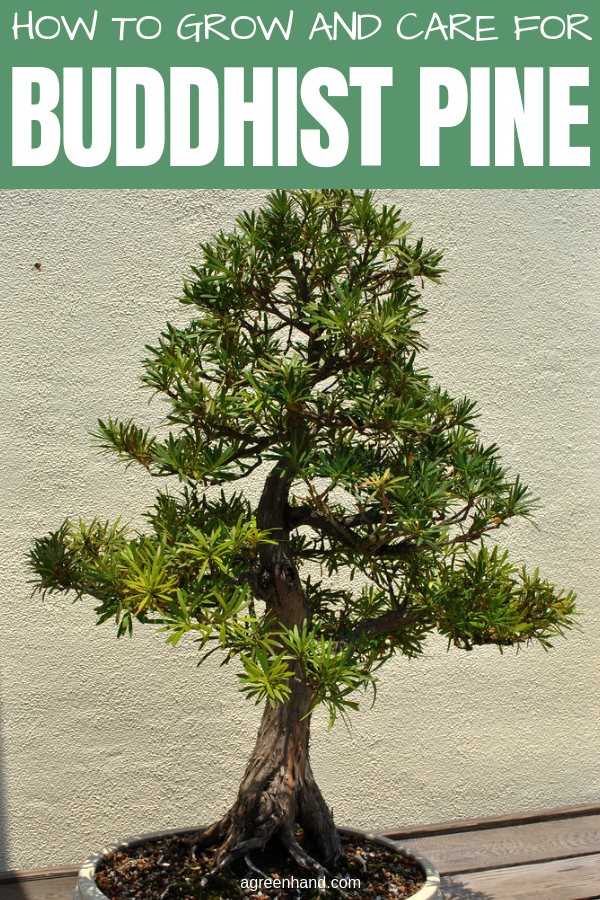