How To Water Houseplants Correctly

While watering houseplants ought to be a simple task, most houseplants that die do so due to overwatering, especially during winter.

The amount of water required by a houseplant varies dependent on the plant and its environment. Checking the requirements of the specific plant is clearly advisable but general pointers can also help on a day-to-day basis. As a general rule, plants with thinner leaves need more water, as fleshy leaves retain more moisture between watering sessions.

Looking at the plant and feeling the compost around it continue to be the best methods of gauging whether the plant needs watering, and by how much. During the winter, a weekly check is normally all that is required, while at other times of year checks should be carried out more frequently.

While some plants have specific needs, the tell-tale signs are fairly obvious in cases. Underwatering a houseplant starves it of moisture, but overwatering drowns the roots and deprives them of air. Heavy overwatering will also cause the roots to rot. Some of the signs are common in both under-watered and over-watered examples. For example the leaves wilt in both cases for most plants.

The leaves will also often discolor in some way in both cases, but an overwatered plant will show signs of mold and the leaves tend to discolor from their tips rather than along the edges as underwatered leaves do. In the case of the under-watered plant, limp leaves will be dry, and the lowest leaves tend to drop off, while in the over-watered case all leaves can fall.

How to Water Houseplants Correctly

In winter, while both temperature and availability of sunlight are both reduced, most houseplants are best “rested” and left unwatered for longer periods than would normally be the case at other times of year when growing will be encouraged. In the case of cacti and succulent plants, most types are best left unwatered throughout the winter.

Tap water can be used for most types of houseplant. While rainwater is to be preferred, leaving tap water to stand overnight both brings it to room temperature and reduces the chlorine levels within it, although this is more of an issue with delicate houseplants rather than hardy species.

Some houseplants do not respond well to having their leaves directly watered too heavily. Hairy and spined leaves can be damaged. A small watering can with a long thin spout is the best type for watering house plants, so that the water can be directed to the base of the plant and the amount of water administered can be more easily gauged. Watering and humidity requirements for houseplants should be considered and balanced with each other.

Having a pot that is filled to the rim with compost will cause it to overflow as it absorbs water. Leaving space below the rim of the pot is advisable. Other methods of watering included watering from underneath the plant by standing it in a tray of water and letting it absorb the water for about thirty minutes. A little care is needed to ensure the roots do not rot if this method is used frequently. 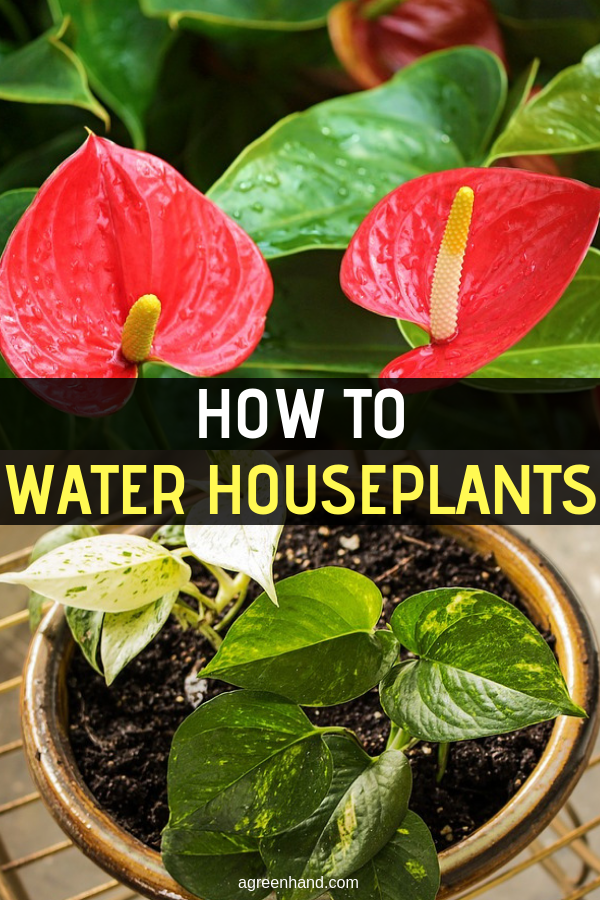