The Ultimate Guides On How To Grow And Care For Camellias

Camellia flowers come in all sizes and shapes from a petite baby’s fist size to that of a man’s outspread hand.

Many people consider camellias to be the queen of plants. The glossy, dark green foliage never seems to wilt or die no matter how hot and dry the summer gets. They are a hardy evergreen shrub that prefers a temperate region. But they can withstand light frosts.

Flower colors range from a red that is nearly black, through all shades of pink to purest white and even yellow. Some are multi-colored with pink spots on white or vice-versa. Some have pink edging on the purest white petals.

Camellia flowers can be single, double or semi-double. The golden stamens at the centre are sometimes long and profuse and in other types shorter. Sometimes the stamens seem to mix with tiny central petals. You can get so many different varieties of camellias that it is possible to have them blooming in nearly every season of the year. Unfortunately, they cannot tolerate heavy frosts or snow. 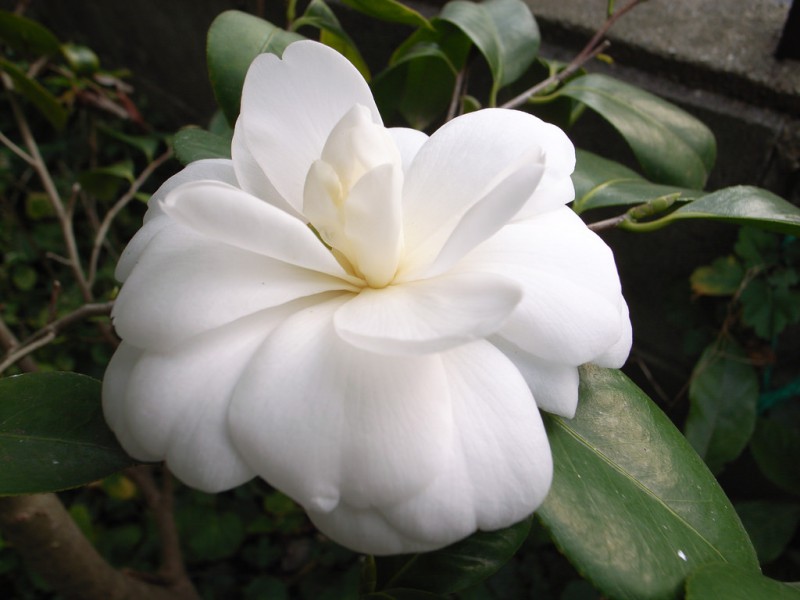 Varieties & Cultivars: Camellia japonica typically blooms in the spring. Camellia sasanqua tends to flower in the fall with fragrant autumn blooms. Camellia reticulate and C. oleifera tend to flower late winter. Many cultivars and hybrids have been created and some of the best for gardeners are mentioned here. 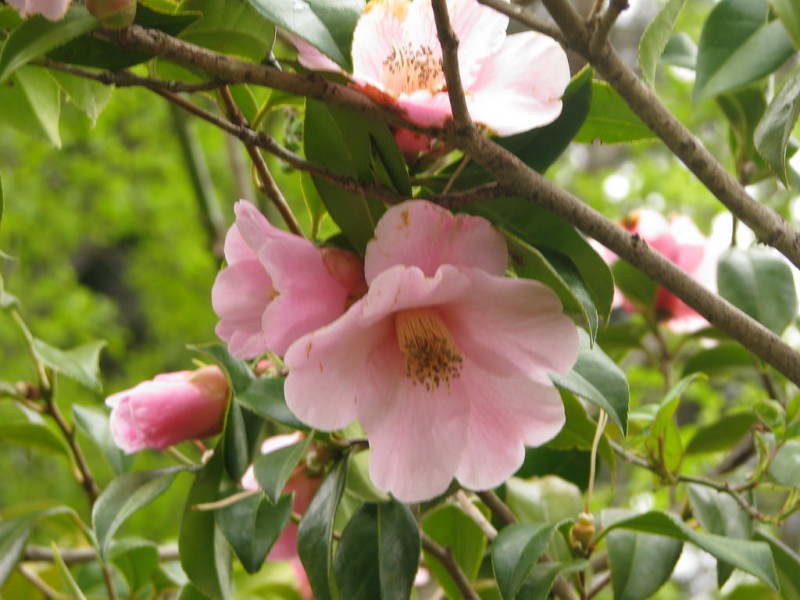 With over 1,000 known varieties and cultivars, anyone who has ever grown these lovely shrubs has a favorite. Leave a comment below to tell us about your favorite Camellia shrub!

While most camellias are only hardy to zone 7, gardeners in more severe climates will be glad to know about the breakthroughs in camellia breeding that allows for a wider selection than ever before of cold-hardy camellias.

These camellia enthusiasts from Maryland and North Carolina have been two of the most instrumental forces in creating a selection of cold-hardy camellia cultivars for modern gardeners. For Bill Ackerman, the journey began after two severe winters in a row killed all the camellias in the collection at the US National Arboretum in Washington, DC except one, a lone survivor. This surviving plant, named ‘Lu Shan Snow’ in 1994, became the foundation parent for many of the hardiest cultivars available today.

Clifford Park worked through the 60s and 70s in North Carolina to develop a series of cold hardy camellias of his own, called the April series. The ‘April’ camellias will survive temperatures down to -17 degrees Celcius but the flower buds will not survive that extreme temperature. 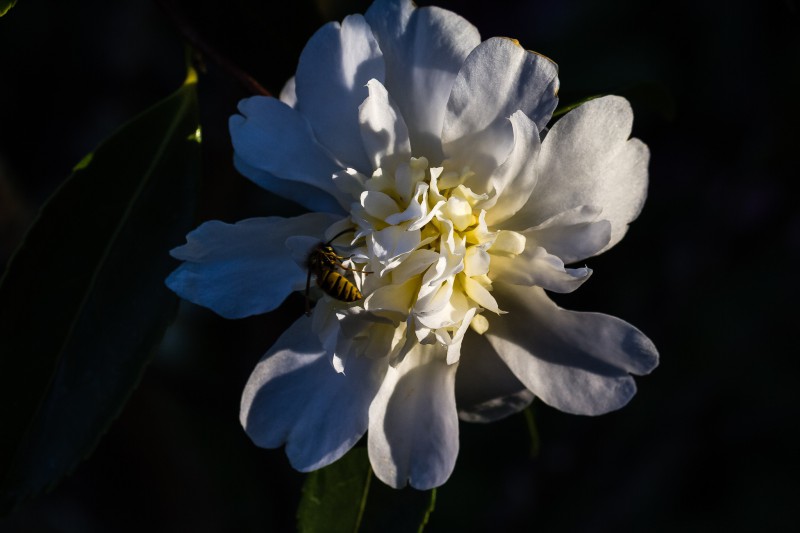 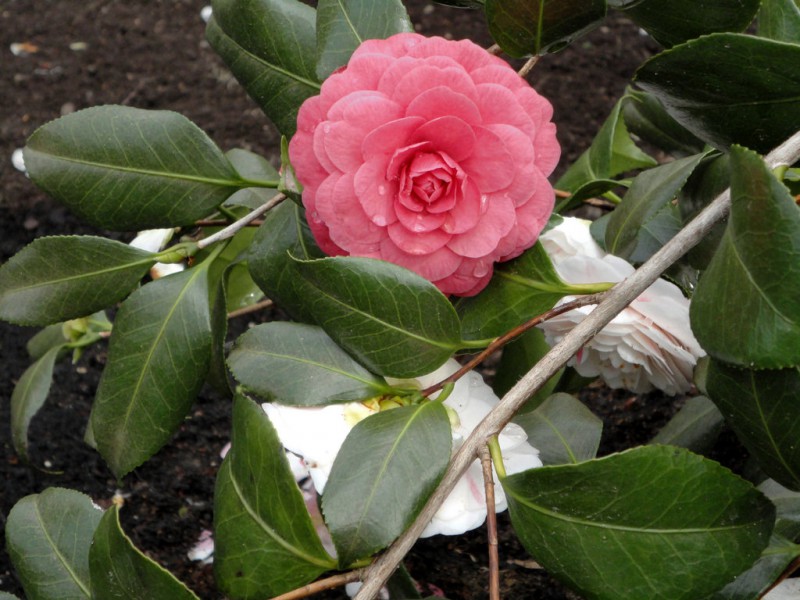 Beginners Guide to the Container Growing of Camellias

Camellias love moist acid soils and a sheltered position in dappled shade. A west facing position is desirable as the early morning sun which follows a frosty night scorches the flowers turning them to mush. They will only grow in soil which is lime-free or neutral, but having an alkaline soil doesn’t prevent the gardener growing these exotic flowering evergreens. The answer is to grow them in containers which have the added benefit of enabling them to be moved into the ideal position at the flowering time. 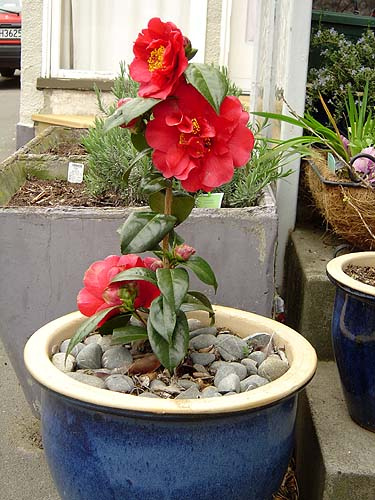 Choice of Containers for Camellias

There is a wide range of containers on the market which may be used for growing camellias, including those made from decorative plastic, terracotta, natural stone, glazed pottery, and wood. The choice comes down to individual tastes with the one proviso that for successful growth any pot, tub or urn should be at least 45cm in both diameter and depth.

Plants in containers don’t grow well in garden soil. For camellias always use a lime-free ericaceous compost (growing medium) which has been specially blended to be free draining and acidic. Place some rocks or coarse gravel in the bottom of the container to ensure sufficient drainage

Care of Camellias in Pots

Don’t plant or re-pot camellias any deeper than they were growing in their original container. Leave a gap of 2.5-5cm from the rim of the pot to allow room for watering. Water regularly especially during dry spells in summer, because dry roots at this time result in the new flower buds dropping off in winter. Apply an ericaceous liquid fertilizer once or twice a month in spring and summer. Pruning of camellias is minimal, simply remove any wayward or leggy branches after flowering. Dead-head camellias regularly as the flowers fade.

Some Camellias to Grow in Containers

The growing of camellias by the amateur gardener was given a great boost by the work of the late Mr. J C Williams of Caerhays Castle about 50 years ago. By crossing Camellia japonica and Camellia saluenensis he developed a new race which became known as Camellia x williamsii. This hardy group of camellias is particularly recommended for container growing and contains many notable cultivars including:

Camellias of all ages can be lightly pruned any time of year, but a more thorough, sometimes even drastic pruning, must be done before spring growth and blossoming occurs. This is late-autumn to late-winter; however, in warmer climates, early blooming camellias are known to blossom as early as February, so be sure to prune before blossoms appear. A camellia plant’s most intense pruning of its annual growth is best done between November and mid-January.

Pruning is good for camellias. They can even handle radical prunes. In fact, a rather drastic shearing can bring new life to an old camellia. The most radical pruning, known as the ‘hat rack’, if done before spring, will help an old plant sprout new leaf buds during growing seasons. Cutting back to the inner structure of the plant – eliciting the image of a hat rack – serves to re-nourish an undernourished, old plant. Be sure to follow the guidelines above when doing any prune, especially a hat rack prune.

Any camellia can be transplanted – no matter how large or how small; yet, the proper time of year, must be adhered to as this one factor could mean the difference between a sick plant or a successful transplant. In most climates, the correct time of year is the same as for a thorough pruning.

For warmer climates and early-blooming camellias, be sure to have relocations completed by late-January – allowing plenty of time before spring. Camellias will adapt to a move better during rainy seasons requiring time for ‘rooting in’ to a new area before the heat of summer’s sun.

Prune Before Transporting Camellias to a New Area

Prune proportionally, in direct relation to the amount of root system lost in the transport.

Three more procedures increase the success of a camellia’s transplant:

Using Camellias in the Garden Landscape

Companion Plants: Camellias are shallow rooted so avoid planting near other shallow-rooted plants such of maple or birch. They enjoy under story levels of pine woods and can be easily combined with other woodlands, acidic loving plants such as rhododendron and azalea.

Seasons of Interest: Camellias provide year-round interest. Beautiful flowers, sometimes fragrant, are the jewel of this plant and appear in autumn, winter or early spring depending on the specific cultivar. Camellia foliage is an attractive glossy green that provides winter interest as well since it is evergreen and lasts all year.

Uses in the Garden: Camellias are especially suited to foundation plantings, background planting along a fence or wall, or to adorn the background of a sitting area in your garden.