As March approaches, you should take arrange some time for managing your garden. This is a period when you can harvest crops while also growing new plants in preparation for spring and the other remaining seasons of the year. To ensure that you can fully utilize this month, we've listed down several gardening tasks and projects for March. 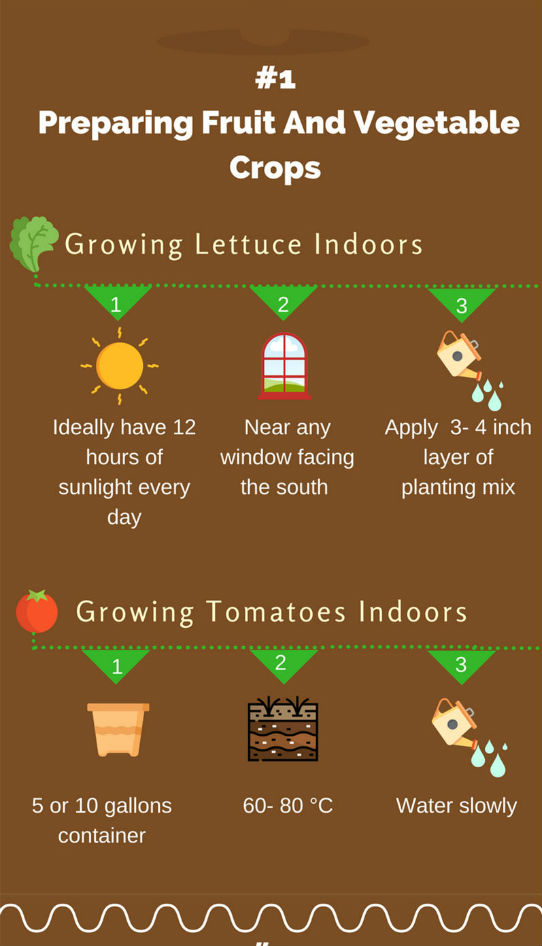 First of all, ensure that the garden soil is abundant with organic matter. If not, you can apply compost, peat moss, and well-rotted animal manure. Adding any of these to the soil will encourage the development of mineral-rich humus.

After preparing the soil, wait until you are halfway into March. This is when you can plant a variety of perennial crops such as eggplants, Brussels sprouts, cauliflower, rhubarbs, leeks, potatoes, and asparagus. In particular, we recommend amending the soil with steer manure if you want to have rhubarbs. March is also the right period for sowing peas and sweet peas.

Later in the month, vegetables such as spinach, cabbage, and cauliflower can be sown in your garden. As for fruits, you pick among currants, boysenberries, grapes, and strawberries. Consequently, pay attention to your indoor garden as well. Here, you can begin growing lettuce and tomatoes. 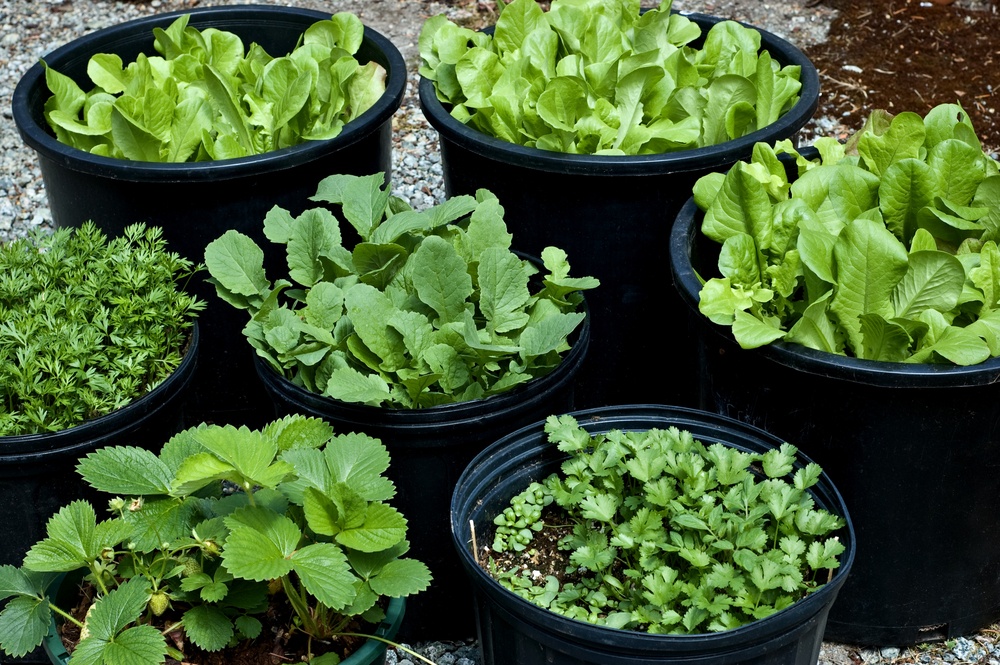 Location is essential when growing crops indoors. The area for your lettuce should ideally have 12 hours of sunlight every day. Usually, such an area would be near any window facing the south direction. As for the container, we recommend using flat and relatively shallow plant containers.

Another option is to grow the vegetables in six-inch plastic pots. Either way, they should have enough holes for drainage. Do provide enough moisture to the soil through irrigation. Also, do apply a three-inch to four-inch layer of planting mix in the container. These preparations should ensure a good start for your new lettuce plants.

Similar to lettuce, tomatoes will grow best when placed on a windowsill. However, tomatoes require a sizable container instead of a shallow one. The container should ideally have a capacity of ten gallons, but a five-gallon container is also alright.

For optimal seed germination, the soil temperature must hover between 60 degrees to 80 degrees. Do not rush when water the tomato plants. Instead, get a drip hose or any similar irrigation tool that allows a slow form of irrigation.

Tending To Shrubs And Trees 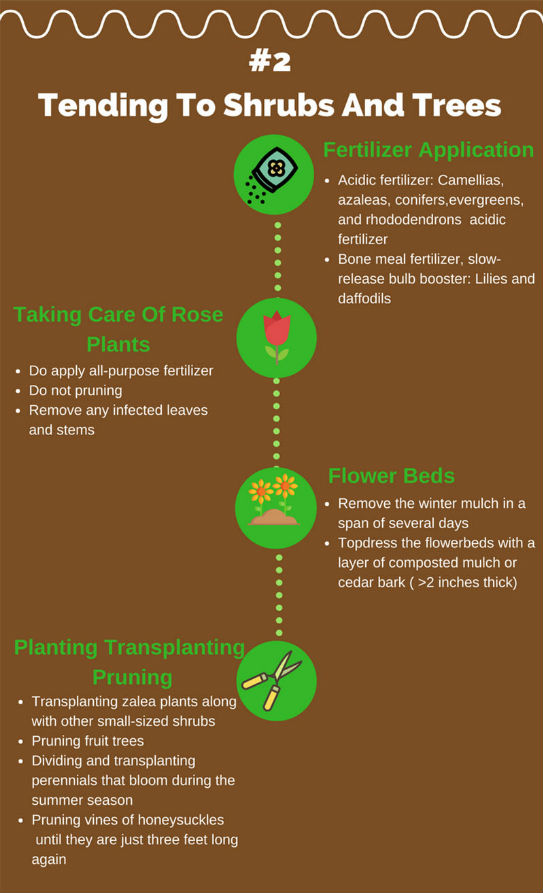 Apart from your vegetables, your shrubs and trees also need attention. For the first half of March, you can still apply dormant oil sprays to your fruit trees. These should prevent them from becoming infected with diseases. Later in the month, you can still spray the fruit trees but only if you dilute the spray by half. Do this when the temperature is at least 40 degrees Fahrenheit.

Check your garden for any shrubs and trees that didn’t have any fertilizer application back in February. Those can be fertilized this month. Camellias, azaleas, conifers, evergreens, and rhododendrons are best fed with an acidic fertilizer. Any established summer-season perennials such as hellebores and violas must be fertilized once they show signs of new growth. Bulbs such as lilies and daffodils that have bloomed could be fertilized either with bone meal fertilizer or a slow-release bulb booster.

On the other hand, deciduous trees such as hickory trees and oak trees should be fed with an all-purpose fertilizer. The same type of fertilizer is ideal for deciduous shrubs like burning bush and the Virginia willow. If you decide to use a granular fertilizer, do provide sufficient water immediately after.

Roses can also have an application of an all-purpose fertilizer. Second, pruning roses in March will lead to slender stemmed flowers and visually appealing rose bushes. More importantly, use a fungicide to prevent the proliferation of the black spot disease. Failure to get rid of the disease will weaken the plants in the seasons to come. Any infected leaves and stems must be removed – and do not use them for your compost heap. 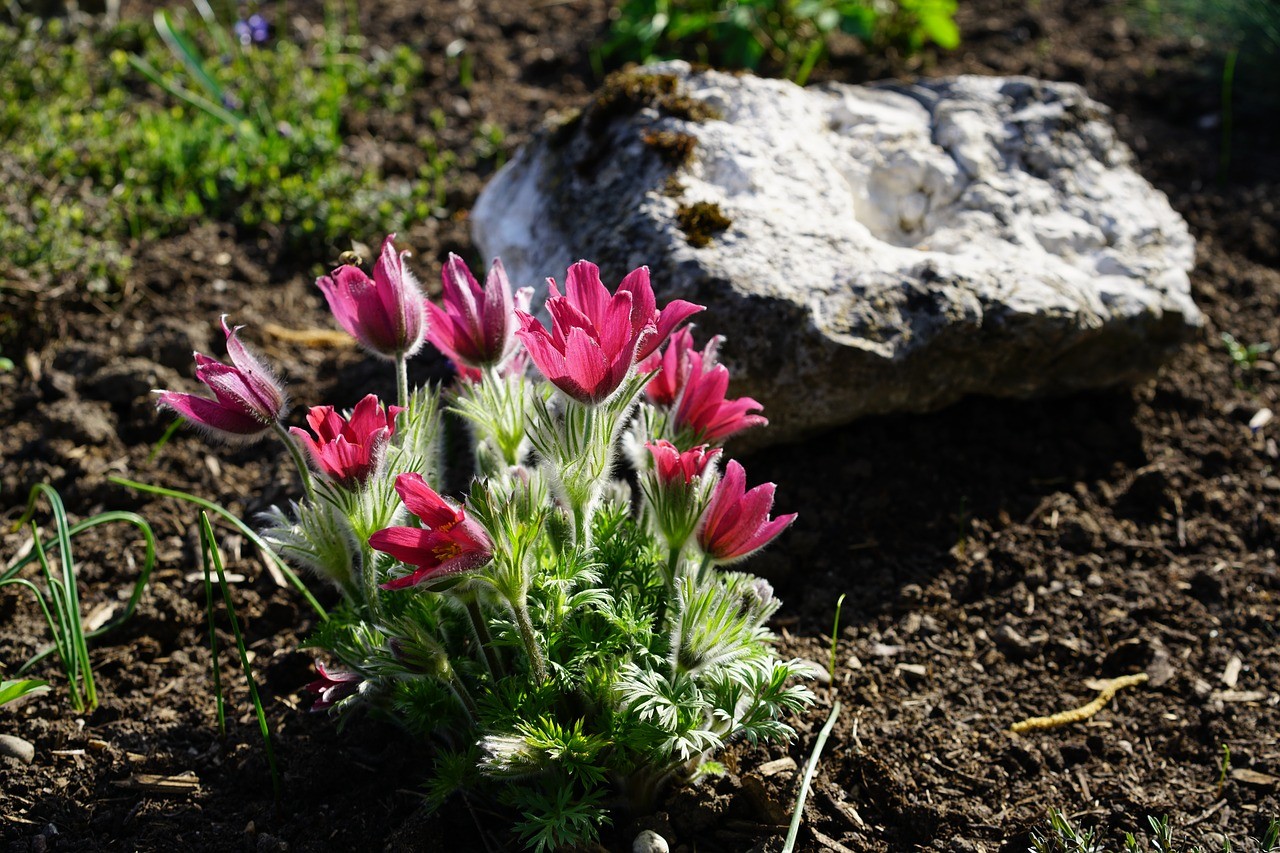 At first, it might make sense to immediately remove the mulch you applied on your flower beds during winter. However, the right way is to remove the mulch in a gradual manner. Remember that the winter mulch was primarily placed there to protect your flowering plants from strong cold winds and rapid changes in temperature.

​Thus, it’s best to remove the winter mulch in a span of several days. This pace is slow enough to allow the flowering plants to get acclimated to the current temperature. Likewise, this ensures that both sunlight and air will slowly but surely reach the newly growing sections of your plants.

A related issue here is when the plants become displaced due to the cycle of thawing and freezing. These processes can damage the root systems and move the plant out of the soil. Check your shrubs if they got pulled up. if they did, carefully place them back in the soil. Afterward, lightly step on the soil with your feet to make them less loose.

Furthermore, topdress the flowerbeds with a layer of composted mulch or cedar bark. The layer should at least be two inches thick to provide sufficient insulation from dry winds and sudden cold nights. Topdressing is also good for weed control and root establishment.

Azalea plants along with other small-sized shrubs can be transplanted in March. However, this is only applicable if the flower buds have yet to swell or break open. On a related note, fruit trees can be pruned by a hedge shear as long as the buds haven’t swelled.

March is a good time for dividing and transplanting perennials that bloom during the summer season. These plants include the Shasta daisy, the Russian sage, lavender, and the summer phlox.

Similarly, you can grow bulbs and tubers including gladiolus and dahlias. if you want an abundant blooming period, grow another batch of these plants every other week right until late June.

As for your winter jasmine, you may prune them only after their flowers have bloomed. Likewise, prune penstemons if they are already well-established in your garden. if you have seedlings of sweet pea and chrysanthemums, do pinch them once they reach a height of four inches. Any vines of honeysuckles should be cut back until they are just three feet long again. 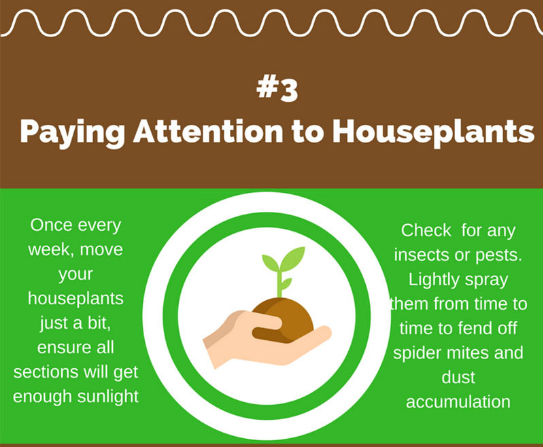 By March, your houseplants will be stimulated to have new growth. This is primarily due to them receiving more sunlight as the days become longer. Once every week, move your houseplants just a bit. This ensures that all sections will get enough sunlight. Any sections that don’t get as much light will contribute to an uneven plant shape.

However, don’t just let them grow out of control. In fact, pinching your houseplants late in March will encourage lush growth. Once you’ve pinched them, apply a diluted solution of a liquid fertilizer for indoor plants. Furthermore, check them for any insects﻿ or pests. Lightly spray them from time to time to fend off spider mites and dust accumulation. 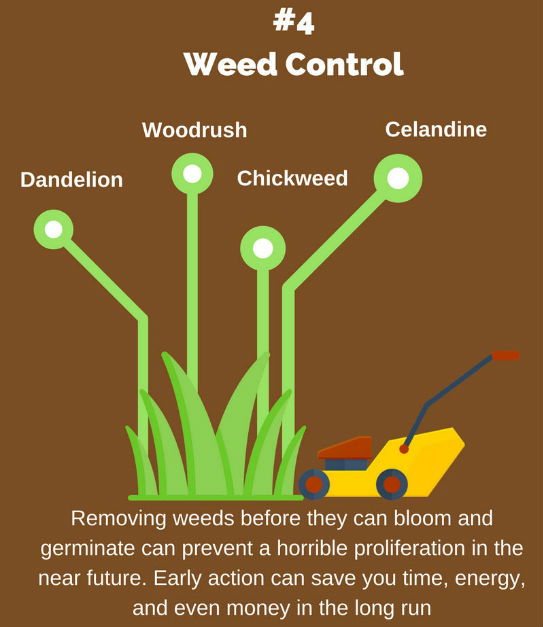 One of the most exhausting tasks for any gardener is weeding, but it’s important to do this in March. Removing weeds before they can bloom and germinate can prevent a horrible proliferation in the near future. Thus, early action can save you time, energy, and even money in the long run. Once you spot newly growing weeds, pull them up completely — don’t let any roots stay in your garden soil.

This pretty but invasive weed begins to bloom as early as March. Removing them by hand is possible, but their lengthy tap roots can be bothersome. One of the most popular solutions is to use any herbicide containing glyphosate, but you can also use organic methods. For example, boiling water will quickly burn dandelion leaves. Once the leaves begin to curl, the hot water will move down in the soil and kill the root systems.

Another solution is salt, but this product can also leave bare patches in your garden. Salt is simply too potent even for your plants. Thus, use salt only on areas where you don’t consider growing plants in. These include cracks in your pavement and in your driveway. Just mix one cup of water with salt and pour it on the dandelions. 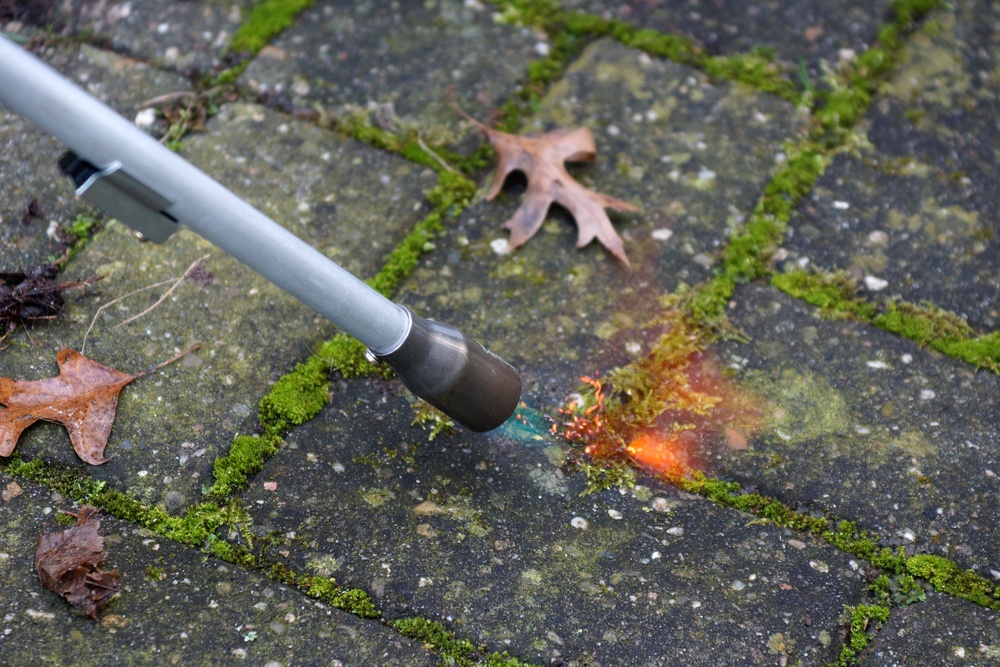 Similar to dandelions, woodrush start flowering this month. This weed is characterized by its thick, hairy leaves that come with dark-colored seed heads that appear as early as late March. Your garden can eventually have huge patches of woodrush, especially if your soil is acidic, sandy, and damp.

What’s worse about woodrush is how it’s resistant to many weed killers because its coarse leaves reduce contact between the product and the plant. You can still use a herbicide if you notice that the leaves aren’t that hairy. Conduct another herbicide application after around six weeks. Otherwise, you can just pull them out of the soil.

This weed blooms up until November, but the removal of this should be done as early as March. While these won’t grow any bigger than two inches, common chickweed can form thick clumps all around your property. Thankfully, these can be removed by hand with ease due to their shallow root systems. You can also mow the lawn to prevent their spread.

Celandine is one of the earliest weeds that can appear in March. Also known as figwort, this weed is characterized by its bright flowers and waxy leaves that resemble a spade. A good thing about the celandine is that it has a short blooming period of just two months. Using a herbicide isn’t the best method due to the waxy leaves. Instead, just dig them out early in March. 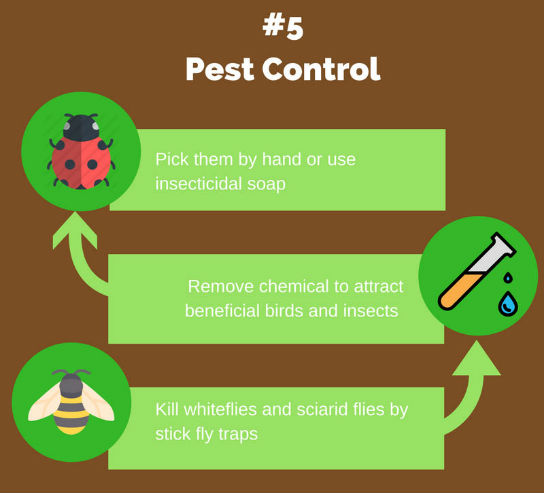 First, aphids can infiltrate your garden and consume all the plant sap they could in March. After all, these pests appear in colonies as they feed on the undersides of leaves. A severe infestation will lead to discoloration and to wilting. Other insects such as wasps and ladybirds will get rid of aphids, but they might not arrive early on. Your best option until then is to pick them by hand or use insecticidal soap.

​You can eliminate the need for chemical removal if you attract beneficial birds and insects to your garden. For one, male hoverflies or flower flies help in pollination by feeding on the nectars. The female hoverflies can lay small eggs that hatch within two days. Since these eggs are placed close to aphid populations, the aphids eventually get consumed by the hoverfly larvae. Apart from aphids, hoverflies can also get rid of caterpillars and scale insects. 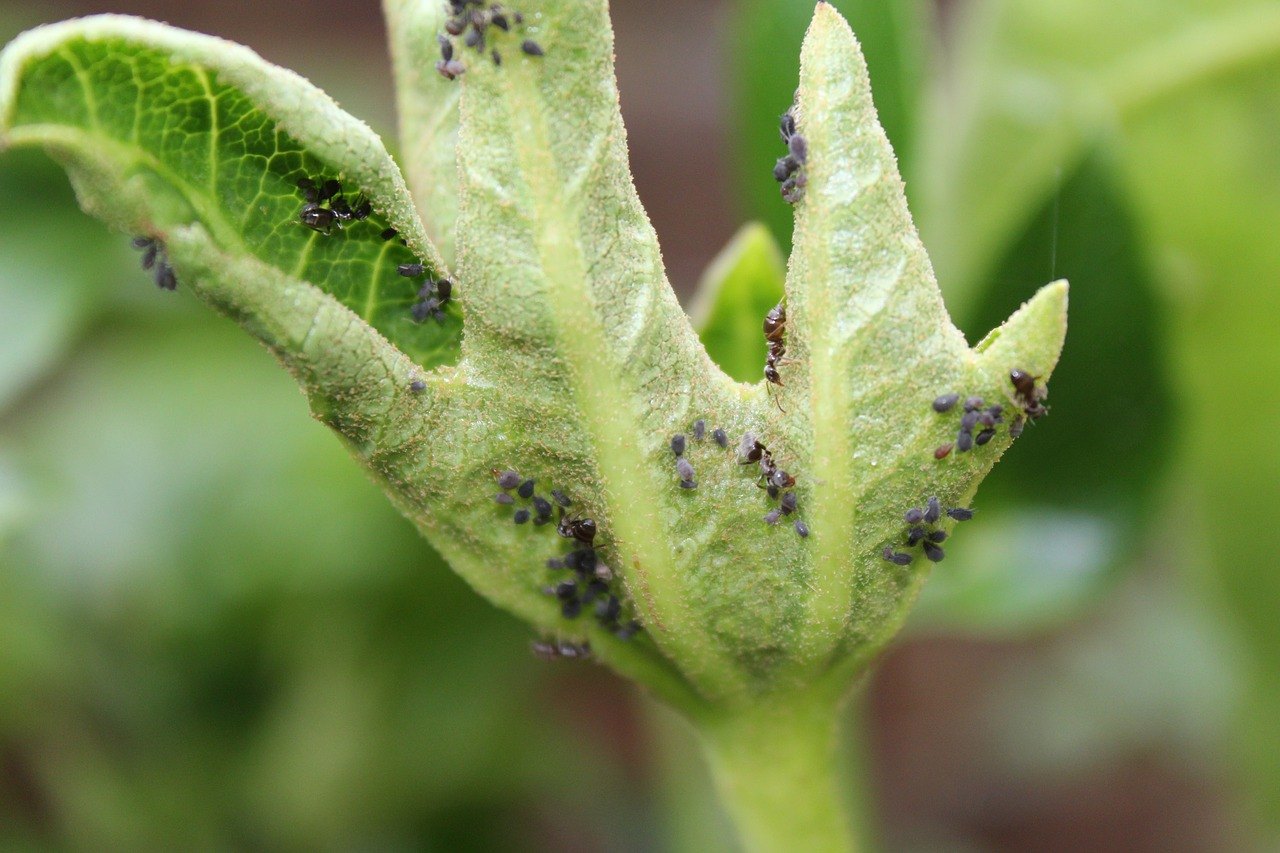 Aside from hoverflies, ladybirds will consume aphid colonies. Beetles can take care of the slugs that come out at night while wasps will eat as many flies and grubs as they can. If there are still slugs appearing in your garden, just buy slug traps and lure them with slug bait. Similarly, get any stick fly traps to kill whiteflies and sciarid flies since the temperatures in March might not be warm enough to deter them.

In conclusion, there are many gardening tasks that you can perform in just one month. Apart from improving the quality of your soil with organic matter, you can start growing lettuce and tomatoes indoors. Many of your flowering shrubs and fruit trees will benefit from pruning.

The winter mulch in your flower beds can finally be removed while perennials and deciduous plants alike can receive fertilizer applications. Take advantage of the sunlight to help your houseplants grow. Lastly, watch out for weeds that flower and pests that threaten your plants in March.

We hope that our guide helped you in growing and maintaining your garden. If you have any questions, do send us a comment.