9 Beautiful Flowers That Bloom In Winter

The winter season isn’t a particularly friendly time for your lawn, especially if you have plant varieties that thrive in warm weather. Usually, this is a period when all plants undergo a dormant stage, with some even suffering discoloration and wilting.

Thankfully, your lawn doesn’t have to look so mundane during the cold season. To help keep your area visually appealing, we’ve compiled nine gorgeous flowers that bloom in winter. What are the flowers that survive winter? With these flowering plants, you’ll be ensured of a wonderful lawn even when everything else is covered with snow.

Also known as the Christmas rose, Lenten rose, and the winter rose, the hellebore is a common choice for lawn owners who need flowers for the winter. This is because it thrives even with a significant amount of moisture and shade, which is apparent during winter.

​When it blooms, the flower simulates the shape of a cup. There are about 20 known species of hellebore plants, and they offer a variety of colors such as green, pink, burgundy, and white. You could have a two-inch hellebore or go for a species that’s two feet tall. While these hellebores will be largely inactive during the summer season, you can expect them to bloom between the months of November to April.

Referred to as winter flowering heather or alpine heath, the Erica carnea flowering plant will provide your lawn with small flowers having a wonderful mix of purple of pink. While hellebores have a cone shape, these flowers have the shape of an urn as they bloom from winter until the first stages of the spring season.

​If you want a plant that will bloom early in the winter, this is your best bet. Once given enough time to grow, it can become a beautiful source of ground cover. In addition, the nectar the winter heath creates will invite bees to your lawn when the winter weather is tolerable. While this flowering plant can be a victim to root rot and wilting, this is largely resistant to both pests and plant diseases. 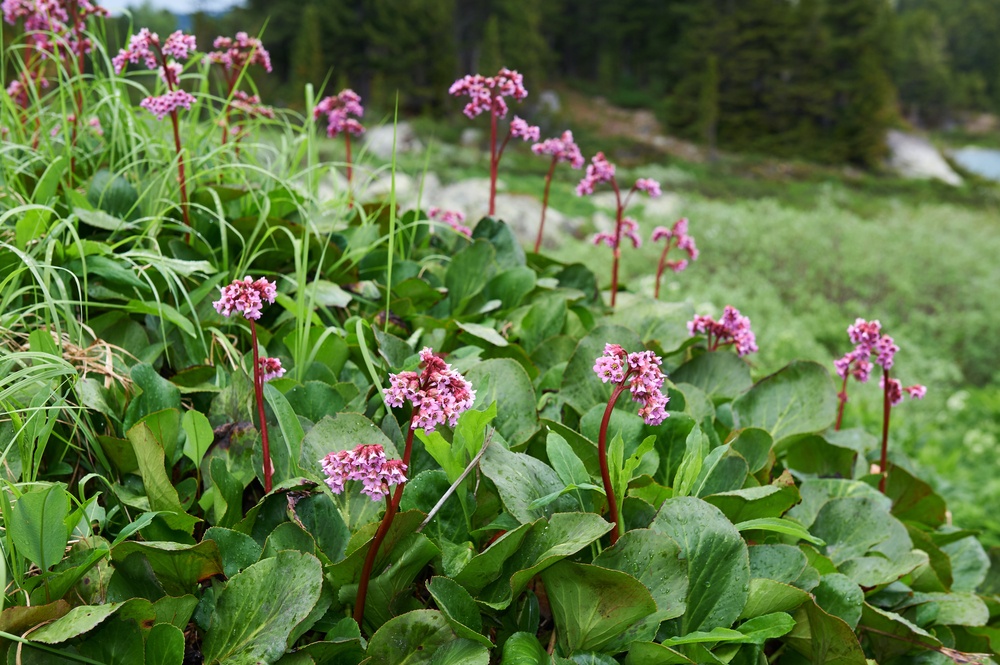 The elephant ear is also known as chembu, dasheen, and tarul. While it can tolerate full sunlight, it will also do just as fine with partial shade. Growing elephant ears will result in clumps that can be characterized by their leaves resembling the texture of leather. Likewise, the leaves typically become yellow or orange as soon as the cold weather kicks in.

​During the late stage of winter until the beginning of spring, the bell-shaped elephant ears will blossom with a deep shade of pink. If they are fully grown, you can expect to have elephant ears with up to nine feet of stems featuring a reddish tone. 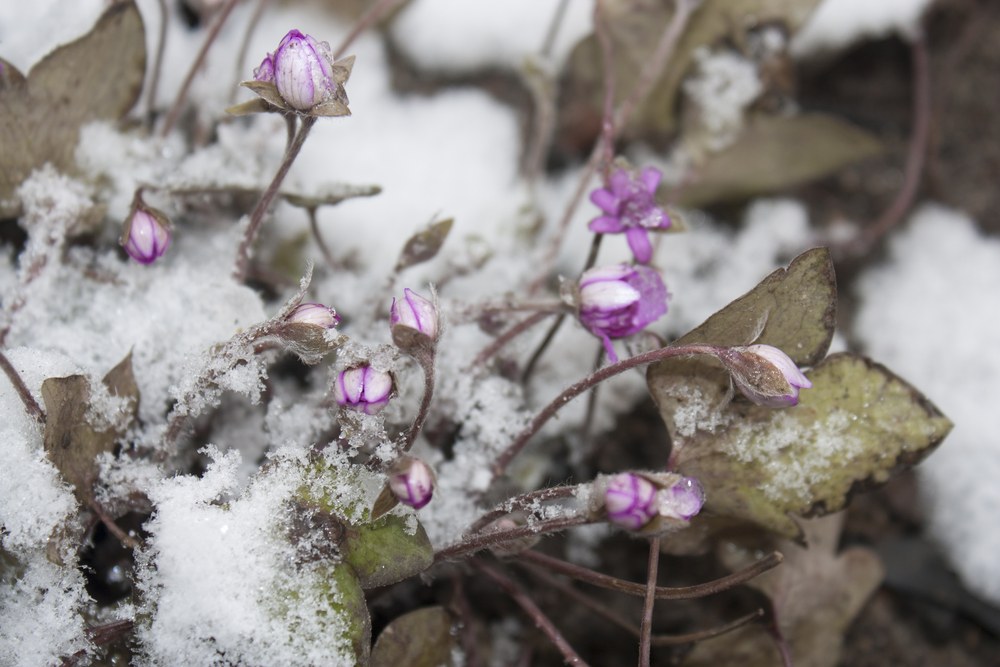 While winter heaths appear early on in the winter, cyclamens only begin to bloom during the late stage of the season. These flowers might not be native to the United States since they originate from Europe and the Mediterranean region, but you don’t have to worry as they are not invasive plants.

​There are 23 species of this perennial flowering plant, and the flowers can appear purple, red, pink, or even white. Instead of looking like urns or cones, the cyclamen is similar to a lily pad. Since this plant can thrive in a partial shade, you can let it grow under the trees in the lawn. 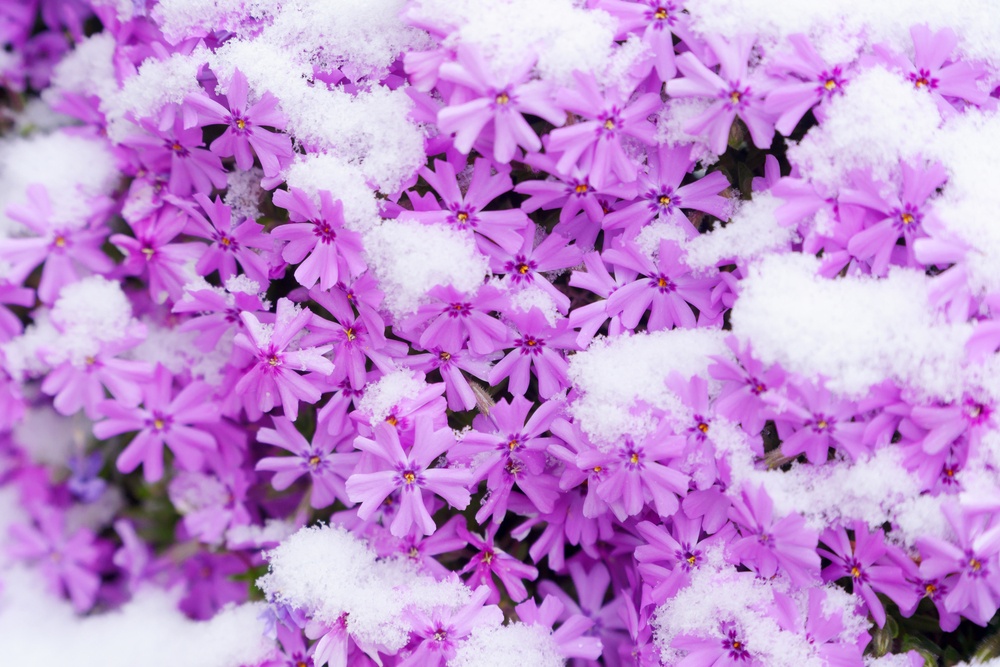 The phlox is typically found in the North American region but at least one species of it is located in Siberia. This will bloom all throughout the winter season, and it can grow in prairies and in alpine tundra alike. It’s a perennial type of flowering plant that thrives under the sun in winter but it has to be grown in well-drained soil.

​Some species of phlox blossom into purple flowers that have relatively dark centers while others can have pink, pale blue or nearly white flowers with a red center. Another great thing about the phlox is that most of its species are fragrant. 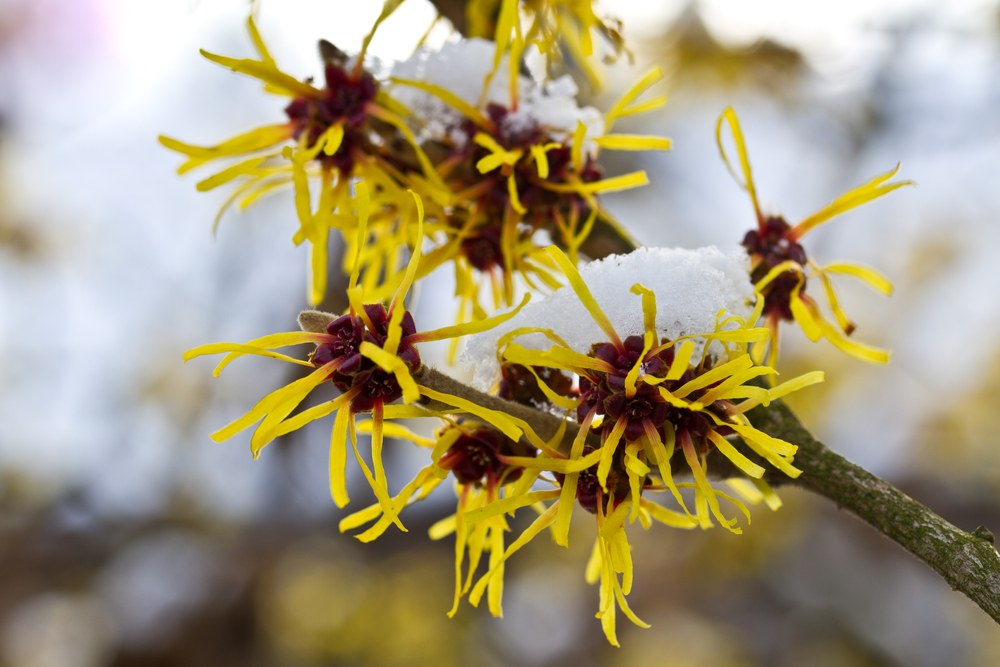 The witch-hazel flower joins the cyclamen as flowers that bloom during late winter. Usually, this deciduous plant will turn into fragrant flowers starting from January until March. The witch-hazel has strap-shaped petals that can have colors ranging from red to yellow to orange.

​On the other hand, its leaves typically transition from pale green to yellow-orange by the time fall arrives. Furthermore, the witch-hazel plant does not have any significant weaknesses to both pests and plant diseases. In fact, the leaves of the North American witch-hazel can be used for skincare products and traditional medicine.

This flowering plant is composed of six species that originated from the southern regions of Europe to the eastern portions of Asia. While it can also be considered as a spring bloomer, the winter aconite can also bloom during the last period of winter. With its yellow appearance, the cup-shaped flowers of the winter aconite can gracefully fill your lawn with vibrancy.

​Although it is known as the winter aconite, it can still thrive even under the full exposure from the sun. If it does get covered by snow every single day during winter, it can easily survive thanks to its frost-tolerant property. 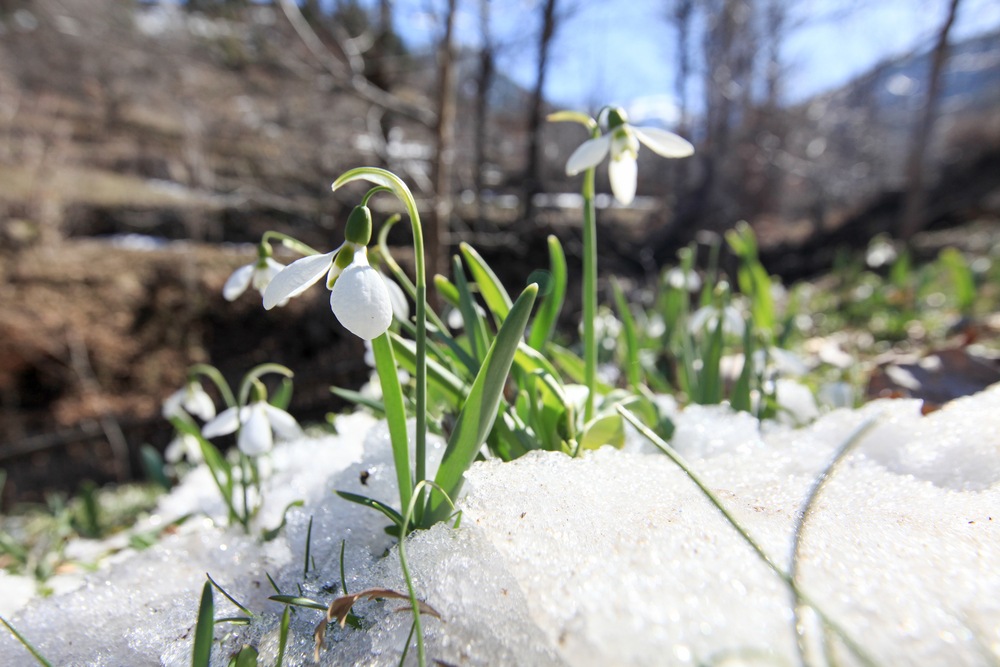 Aside from snowdrop, you can also refer to this plant as the Galanthus. It is characterized by a couple of linear leaves and a bell-shaped flower. This snowdrop flower is white in appearance and contains six tepals, which are the outer parts of the flower. On the other hand, the inner petals are quite small and feature green spots.

​Like the other flowers in this list, snowdrops bloom late in the winter season. Once you see the bright green leaves of this plant, you’ll immediately know that the spring season is about to arrive. If you want a winter bloomer that basically requires no maintenance whatsoever, this is your flower. 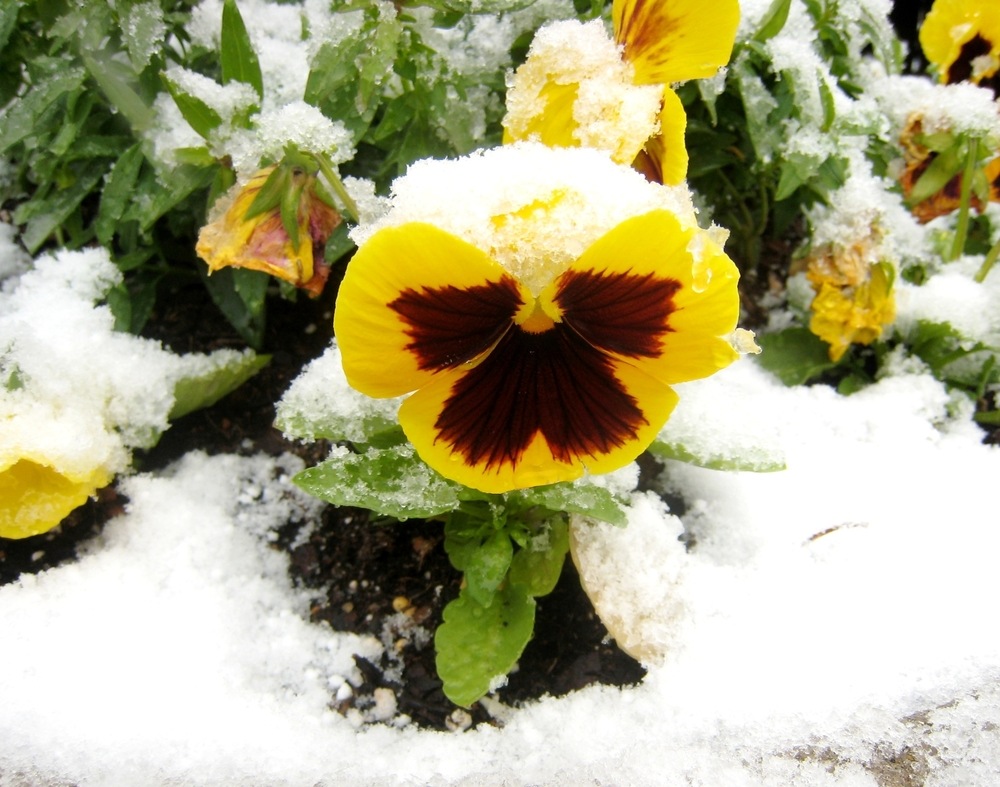 Finally, we have the commonly grown pansy flower. It has a height ranging from six to nine inches and a diameter of two to three inches. The flower has five petals, and they can have a white, blue, yellow, or a slightly purple appearance. You can plant pansies to decorate your sidewalks and your pathways since the size will complement these sections of your property.

​Pansies will not die when exposed to light freezing temperatures and to temporary snow cover. In case the snow cover occurs for a long period, you can keep these flowers safe by using dry winter mulch. 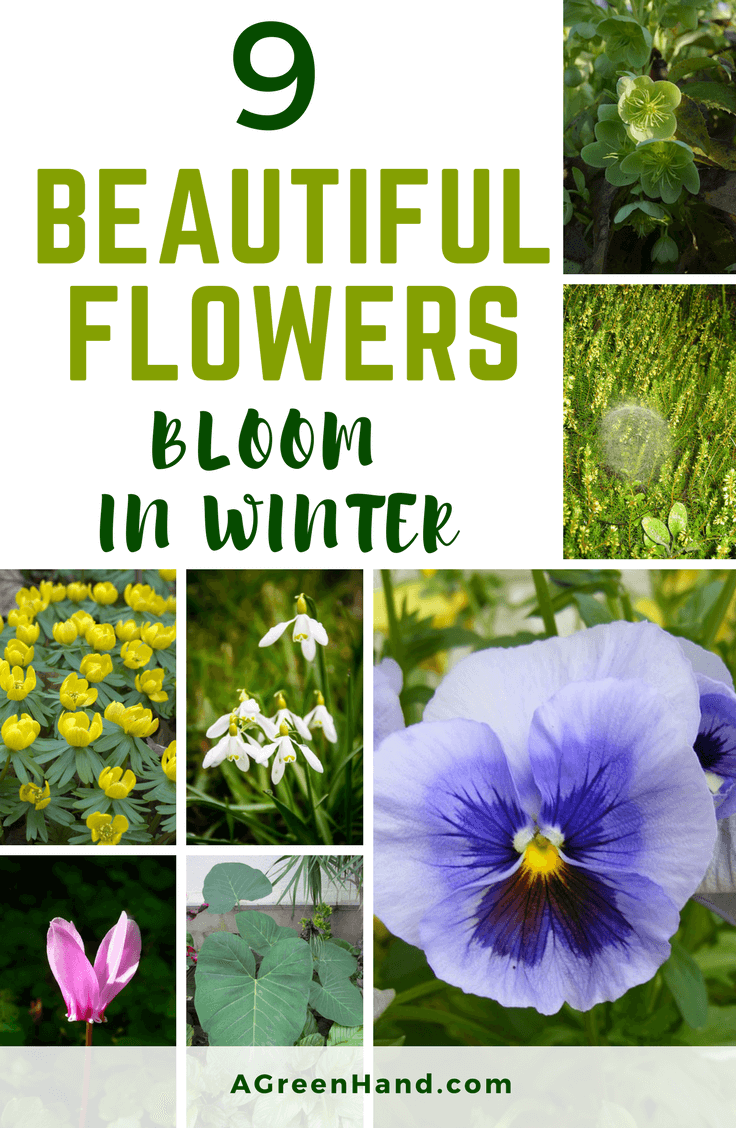