Weed Eater vs. Weed Whacker: Is There a Difference

Are you a whacker or are you an eater?

Which side of the green-fingered fence do you fall on? Or do you subscribe to the school of thought that believes that the fence doesn’t actually exist?

Regardless of which camp you consider yourself to be a part of, the seemingly eternal weed problem that gardeners of wildly varying degrees of ability and affinity face, and are forced to deal with on regular basis can’t be denied.

If left unchecked, weeds would consume and subsume everything in their horticultural path, and like Audrey II and its allies, the Triffids would gradually become the dominant force in gardens everywhere. 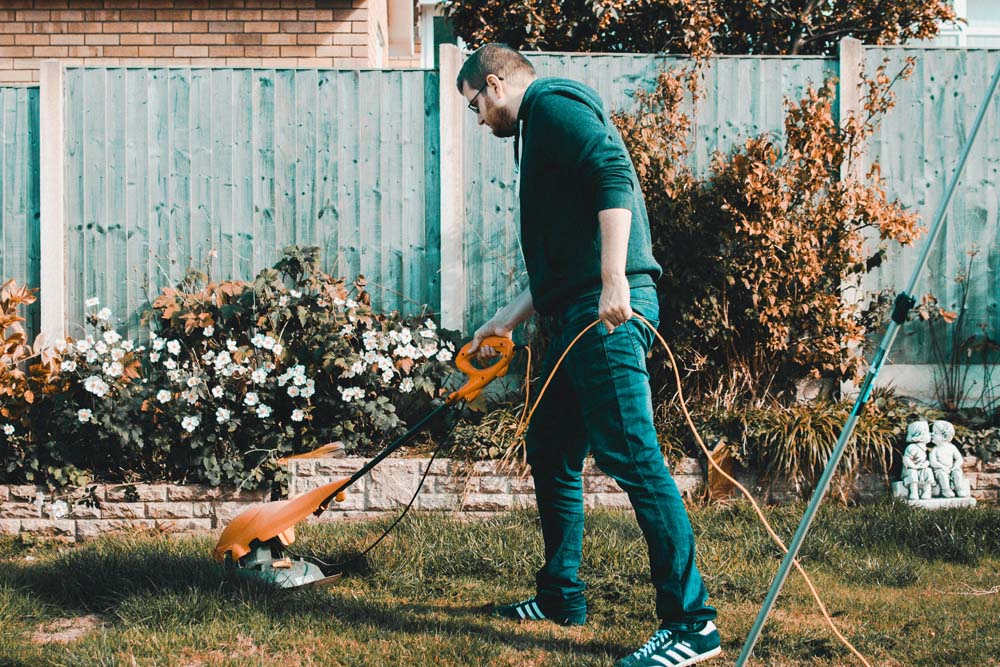 The struggle and the fight, against weed incursion, is waged on multiple fronts on a daily basis. It’s an unending conflict that rages unabated.

Locked in a state of near-perpetual stalemate, the best that most of us will ever be able to do is control, and contain the problem and without hope of reprieve or a decisive victory, every gardener and flower-loving landscaper needs to be equipped with the very best tools to combat weed infestation with.

So, which is better at dealing with and cutting back weeds? The weed eater or the weed whacker? And what separates and differentiates them?

Whacking And Eating- What’s The Difference?

If weed whackers and weed eaters both do the same job, what makes them different? Honestly? Not an awful lot, as essentially they’re both exactly the same thing.

Whether you call it a weed whacker or a weed eater, the tool that you’re actually talking about is called a string trimmer.

Why Is It Called A Weed Eater?

That, like most things that spring from the psyches of the often unacknowledged minds that keep the world turning, particular colloquialism is more than likely the fault of, and entirely due to the guy who invented it, George Ballas. A native of Dallas, Texas,

Ballas claimed that came up with the idea for the string trimmer while sat in a car wash sometime in the early nineteen seventies.

Hypnotized by the constantly revolving motion of the brushes as they cleaned his car, Ballas began to imagine how he could apply the idea to a device that would deal with the common gardening affliction that he was plagued by; weeds.

Obsessed by his idea, Ballas retreated to the drawing board and not long after, built his first string trimmer. As initial prototypes go, it wasn’t bad and did what he thought it would do, even though it was just some fishing line fasten to an empty popcorn can that was in turn bolted on to his lawn edger.

The results surprised even the usually modest Ballas and after taking the time to further refine his invention, he soon christened his device, calling it a “weed eater” because of the way it chewed up, and through, weeds and spat them out.

So It’s All George’s Fault?

Well, yes and no. George was the first to call his new string trimmer a ‘weed eater’, but he wasn’t the reason the name entered into the popular gardening lexicon.

The most likely explanation for the association is that after trying to sell his idea to multiple companies and being, without exception, turned down, and away by all of them, George went into business for himself to produce, market, and sell his new gardening tool.

It’s An Eater Not A Whacker

Name recognition is everything, and as George’s company found its target audience, gardeners all over the Southern states, universally started referring to their new weapon in the war against weeds as ‘weed eaters’.

And the more they called them that, the more everyone who used one started following the lead of the folks down South and called their newest, best gardening friends ‘weed eaters’.

The name stuck and it was all because of George and the brand that he built in the wake of being shooed away by every other big dog in the gardening yard.

Wait A Minute Though, Why Can’t I Buy A Weed Eater At My Local Gardening Store?

The reason you think you can’t buy one is that the trimmers aren’t sold under the Weed Eater brand name anymore. They’re now called Husqvarna

George eventually sold his company to Emerson Electric for, what we hope at least,  was suitcases filled to bursting with dollar bills. Emerson in turn merged Weed Eater with another company called Poulan, which created the Weed Eater/Poulan brand, which was later sold to Electrolux.

Following their purchase of Weed Eater/Poulan, Electrolux rebranded their entire outdoor division as Husqvarna AB in 2006.

So you can still buy a Weed Eater. It’s just that these days, they’re known as Husqvarna.

Wait A Minute...If That’s True, Why Do Some People Call Them Weed Whackers?

That’s a good question, and like all the best enquires forged in the constantly bubbling furnaces of the most inquisitive imaginations, it has an incredibly simple and straightforward answer.

It’s a slang expression, the exact origin of which is lost to the mists of horticultural time, that gradually entered the mainstream consciousness of its country of origin.

The bit that leaves almost everybody scratching their heads though, is how the term, traveled halfway around the world and became a part of everyday language in America.

We blame television, and even though we’re probably wrong it’s as good as reason as any of the hundreds of odd, and strangely interesting reasons that the quirkier parts of the internet blame it on.

Well, technically they are, as there’s nothing to stop you using a brand name and a popular slang expression when referring to a string trimmer.

But, there’s absolutely no difference between them, as they’re both the same thing. They’re string trimmers.

So What Is A String Trimmer? What Does It Do?

Essentially, they’re pretty much the same today as they were when George Ballas first came up with the idea for them in a car wash in Dallas in the early nineteen seventies.

String trimmers are gardening tools that are used to cut long grass, shrubs, and persistent, hardy ground cover. Instead of a blade, they used a toughened monofilament cable that is attached to a rotating spindle on the end of a long handle which allows them to reach the places that other gardening tools can’t.

They’re loud, they’re fast, they’re mean and they’ll cut through just about any sort of invasive greenery that gets in their way.

Using, and working from, the principle of centrifugal force, the faster the spindle, or hub spins, the stiffer and harder the monofilament line gets.

This means the faster you gun a trimmer, the more effective it becomes at doing its job. And the stronger the monofilament cable, or line, that you use in your strimmer, the tougher the undergrowth, weeds and ground cover a trimmer can cut through and get rid of. 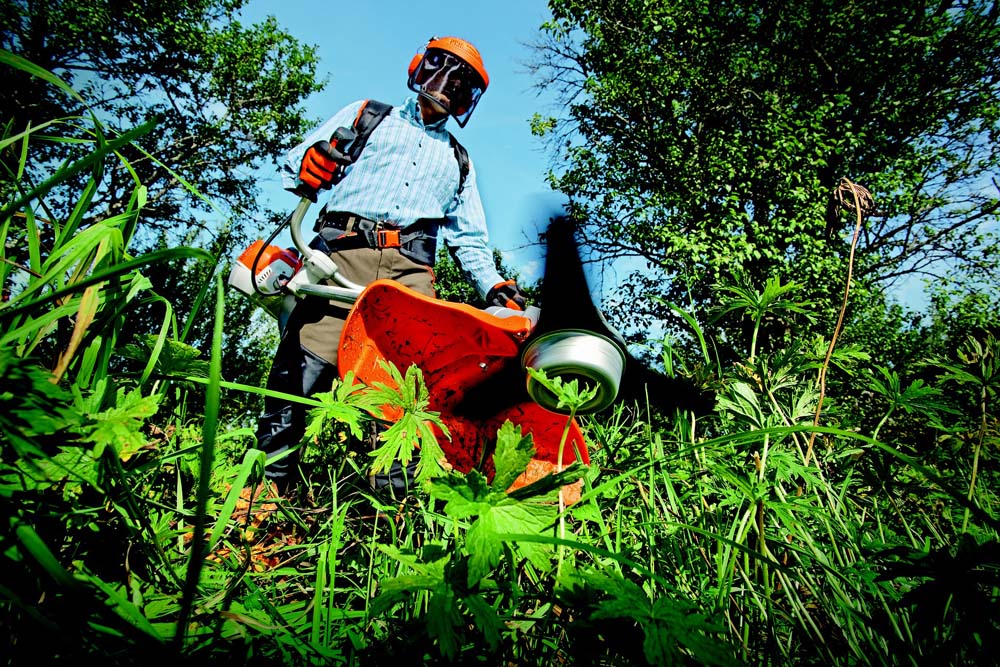 The cable is attached to the spindle, and wound around it before the trimmer starts and as, and when, the cable/line breaks, it is automatically fed out of, or can be pulled by hand from, the spindle which ensures smooth and continuous operation.

The tougher the filament line that you use in a trimmer, the less it’ll break, and the less it breaks, the less you use, which means that it’ll be able to cut more for far longer. Tougher, as far as trimmers are concerned, is always better.

While most string trimmers that are designed to be used at home are powered directly from mains electricity, which can and does lead to all sorts of accidentally severed power lead problems and runs an inherent, if somewhat minuscule risk, of electrocution, hardier, more powerful trimmers are always gas-fueled.

This allows them to be more mobile, gives you a greater degree of freedom and flexibility, and means that you can trim just about anything you set your mind to.

If you want the sort of power that you’ll need to lay waste to the most durable of weeds and garden-based invaders, the only way that you can really tackle them with any guarantee of lasting, and resounding success is with a gas-powered trimmer.

Take our advice, when it comes to using a trimmer, you want to make sure that it’s loaded with the toughest filament you can find and that it has a full tank of gas before you set out to fulfill your horticultural mission objectives.

This is a gardening riddle, wrapped in a mystery that’s tied up in an enigma.

They’re all vastly different tools that are used for different jobs but are often confused as they all do the same thing. Sort of.

What Does An Edger Do And Why Isn’t It An String Trimmer?

Admittedly, they’re sort of similar, and theoretically, string trimmers and brush cutters serve a similar purpose, but the way they do it is vastly different.

Comparing a string trimmer to a brush cutter is like comparing a Volkswagen Bug to a 1966 Chevy Nova Super Sport.

They’re both cars, and technically they do the same thing, but one does that thing with a lot more power, speed, brute force and volume than the other does.

A brush cutter uses a toughened blade to cut through the sort of undergrowth, brush, and ground cover that even the most resilient string trimmers wouldn’t be able to cope with.

That said, they’re almost always heavy and cumbersome, and unless you really need them to do a job that the string trimmer just can’t do, they should always be your last horticultural weapon of choice.

I Just Had A Look At My Backyard And Now I’m Pretty Sure That I Need A String Trimmer - Which One Should I Get?

And in that sort of situation, the only string trimmer that you can truly depend on is the tool that proudly continues it’s inventor’s legacy, the Husqvarna. It’s what George would have wanted.
Pin
Tweet
Share
79 Shares