If you have to clear the snow off from a sizable driveway or any pavement with a relatively steep incline, a single stage snow blower wouldn’t be enough. In such a situation, the right solution is to get a 2 stage machine. With our assistance, you can get the best 2 stage snow blower under $1000.

​Purpose And Limitations Of A 2 Stage Snow Blower

Once the snow reaches a maximum width of 30 inches and a total depth of 16 inches, you should replace a single stage sno﻿﻿﻿w blower with a 2 stage machine. While both snow blower types use augers to gather and throw snow into a chute, only the 2 stage have an impeller. This impeller is located behind the auger and spins around during operations to improve the snow-throwing distance.

​Of course, the added impeller and the hefty engine add considerable weight to the machine. With more snow-clearing power, they have a bulky size requiring more storage space. Still, there are 2 stage snow blowers featuring a compact design only 24-inche wide.

On the other hand, the 2 stage snow blower﻿ is still cheaper compared to a three stage machine, which distinguishes itself from the first two types by having an accelerator. With this accelerator, the collection auger and the impeller gather and discharge quicker than the other 2 types. 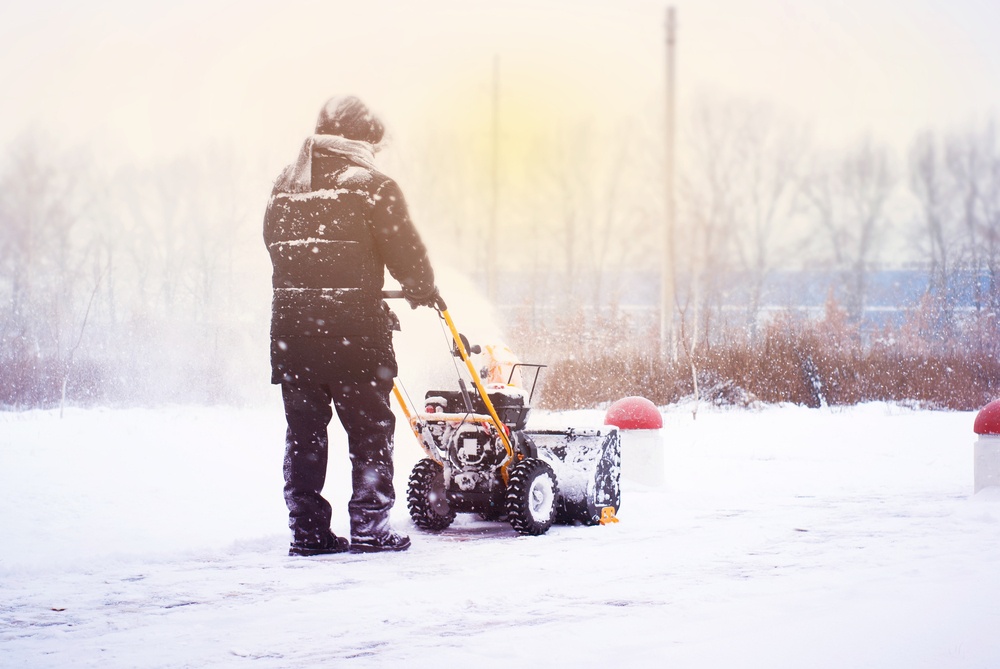 A two stage snow blower is far from a cheap product – it’s an investment. This machine will cost you hundreds of dollars, not including the repair, replacement, and maintenance expenses in the long run. You will also need to allot enough space for storage.

​Snow blowers do save you a lot of time and energy in clearing the snow off your property during the winter, but you have to be ready to shell out a lot of money. ​But It' not difficult to look for an inexpensive 2-stage under 1000, 600, even under 500.

​Before you buy one, evaluate your area first. How many times do you need to clear out snow? If it’s just an occasional task each year, maybe it’s not worth the price.

​Furthermore, check the size of the driveways, sidewalks, and all of the pavements to be affected by snowfall. With a small driveway, you’ll be fine with a durable snow shovel. Sure, you’ll have to exert more physical effort, but it’s cost-effective.

​If the snow depth doesn’t exceed five inches, a shovel would do. If you have a huge driveway and snowfall exceeding five-inch deep most of the time, the benefits of a snow blower would outweigh the financial costs.

​In particular, a lightweight and electric-type snow blower would be appropriate for clearing a maximum of 10 inches of snowfall. Once the snowfall depth reaches 16 inches, it’s time to get a powerful gas-type snow blower.

​When the snowfall goes beyond 16 inches and becomes heavy or wet, you should buy a two-stage snow blower. With its gas-powered engines, even heavy snowfall wouldn’t be much of a problem.

​Two-stage snow blowers are not as small as their single stage counterparts, so they can’t easily go through narrow walkways. What’s great about them, however, is that they can automatically propel themselves to get rid of both ice and snow.

​The engines in a 2 stage snow blower won’t always be the same. Some of them have particular fuel or engine maintenance needs, and different sizes depending on their maximum power output. Please take note that a four-cycle overhead valve engine is a good balance of power, ease of control, and relatively quiet operation.

​The dead-man control of the snow blower needs to work well at all times for your own safety. If this part is faulty, both the auger and impeller could keep spinning around even when you’ve already released the handlebar grips.

​A two stage snow blower will at least have four forward speeds. Some even include a couple of reverse speeds. Both of these reduce the risk of machine clogging as it goes through the heavy or wet snow.

Here, we’ve compiled five 2 stage snow blowers that appeared promising enough to grab our attention. Their performances differed from each other, but they all have something good to offer. These are best deals on snowblowers.

This snow blower has a working width of 24 inches. Therefore, it is fairly compact for easy storage despite the sizable clearing capacity. With a 208cc Husqvarna engine, the Husqvarna ST224 can constantly clear snowfall 12 inches deep.

​The 12-inch ribbon augers perform well with the help of the power steering feature. The 15-inch wheels are sturdy enough to make the machine climb steep inclines. Snow-clearing could go uninterrupted since the fuel tanks can accommodate 2.7 liters of gas and oil.

​Moreover, you do not have to manually adjust the disposing chute. With a remote control, you could easily control the deflector and rotate the chute for as much as 180 degrees. There’s a loop handle to maintain a good grip of the snow blower. The handle grips are fairly heated to keep the user comfortable even in the freezing cold weather.

​You can clear out all of the accumulated snow at night, thanks to the LED headlights. Regardless of the time of day, the Husqvarna ST224’s electric start feature will ensure quick activation with the push of a button. The gearbox is aptly made of aluminum to withstand harsh weather conditions, and Husqvarna offers both a 3-year limited warranty and a 5-year engine and gear box warranty.

Up next, this snow blower was created by Husqvarna to effectively clear snow in huge driveways and walkways with ribbon augers. The Husqvarna 961930097 uses adjustable skid shoes so that it can be used on any surface type without fear of breaking the pavement. Heavy-tread wheels readily provide the increased traction required for steep and slippery areas.

​There are some similarities between the two reviewed products. First, the handle is adjustable and the grips are heated. Second, there are LED headlights for snow-clearing operations in the dark.

​Beside that, in this model, there’s an electric start feature for hassle-free activation and a sturdy gearbox to keep the parts protected from the natural elements. If the machine has issues, you can use the 5-year warranty.

​Among the 5 products review, the Husqvarna 96930097 can clear the deepest with 27 inches. If you want to immediately change the speed because of the snowfall level, just use the friction disc transmission. Maneuvering this 2 stage snow blower isn’t difficult thanks to the trigger control power steering.

An interesting feature from YARDMAX machine is that it offers both a push-button electric start and a recoil starter in case the former method doesn’t work. The company uses either a 7-horsepower LCT electric start snow engine or a YARDMAX 6.5 horsepower 196cc recoil one.

​A multi-speed, self-propelled drive system reduces clogging problems. You can pick among six forward speeds and two reverse speeds with the speed control to clear the snow as safely and efficiently as possible.

​The YARDMAX YB6270 can handle both heavy snow and packed ice with its serrated steel augers. Once they have been sliced, the high-speed impeller gathers and leads them to a discharge chute. This chute has been engineered to reach great throwing distances without resulting in a problematic blowback.

​Upon activation, a hefty 950 snow series 208cc engine powers the snow blower with 9.5 foot-pounds of torque. Reversible skid shoes made of steel plow the snow faster. Safe adjustment of the clearing speed is achieved with a friction disc transmission. Lastly, Briggs and Stratton included a three-year equipment and engine warranty for this two-stage snow blower.

This 2 stage snow blower from Troy-Bilt has a 21-inch clearing depth that’s complemented by a 26-inch clearing width. To power it through heavy snowfall, the Troy-Bilt Storm 2625 relies on a 243cc 4-Cycle Electric Start OHV engine. You can even pick between six forward speeds and two reverse speeds during a snow-clearing operation.

​Since the snow blower works fast in dealing with heavy snow, the polymer discharge chute was designed to be clog-resistant. The skid shoes keep the snow blower stable, and they can be reversed to prevent damaging delicate surface. Of course, the Troy-Bilt Storm 2625 has only a two-year limited warranty.

Overall, our favorite two stage snow blower is the Husqvarna ST224. This machine can clear paths 24 inches wide and 12 inches deep with ribbon augers powered by the 208cc Husqvarna engine. Even with significantly heavy snowfall, it can keep going with the help of power steering.

Finding the right speed to prevent clogging is easy with friction disc transmission. Consequently, the adjustable skid shoes and the 15-inch heavy-tread wheels keep it moving on steep inclines and on various surface types.

​Compared to the Troy-Bilt Storm 2625, the LED headlights are conveniently placed to provide enough illumination in the dark. The fuel tank is enough for a whole operation, both chutes and deflectors can be remotely controlled, and the handle grips are sufficiently warm.

​In addition that, the company even has two warranties to address any engine and parts issues. Basically, the Husqvarna ST224P is our favorite machine for its fantastic combination of user comfort, performance, and long-term reliability.

A Quick Guide In Selecting The Best Two Stage Snow Blowers
Comparison Of Best Roof Rakes For Snow Removal
How To Choose The Best ATV Snow Plow
Best Electric Snow Blower Reviews 2018
Snow Thrower Vs Snowblower: How Are They Different?
Step By Step Guide On How To Drain Gas From Snowblower