How to Get Rid of Pokeweed & Avoid It in the Future

Phytolacca americana (American pokeweed) is a strong, non-woody shrub that is growing across California. Pokeweed is a plant that was once only found in the eastern United States, from Maine to Wisconsin, and south to Texas, Mexico, and Florida. It now grows over most of North America. Pokeweed may be found throughout California’s Central Valley, along the coast from Mendocino to San Diego, and in the Sierra Nevada, generally below 4,000 feet. Pokeweed may be found in riparian regions, oak forests, forest borders, fence rows, forest openings, pastures, disturbed areas, vineyards, orchards, cultivated fields, parks, and ornamental landscapes, as well as under power lines.

The plant is also known as poke salad, poke sallet, pokeberry, inkberry, American nightshade, American spinach, scoke, and pigeonberry, among other names. Pokeweed has been used as a food, medicinal, herb, clothing dye, writing ink, wine colorant, and much more in the past. Although the entire plant may be eaten, it is extremely dangerous and should be handled with utmost caution. Young pokeweed leaves and stems may only be eaten after repeated blanching; if not properly prepared, pokeweed can induce a range of illnesses, including death in rare circumstances.

7 Natural Ways To Get Rid Of Pokeweed 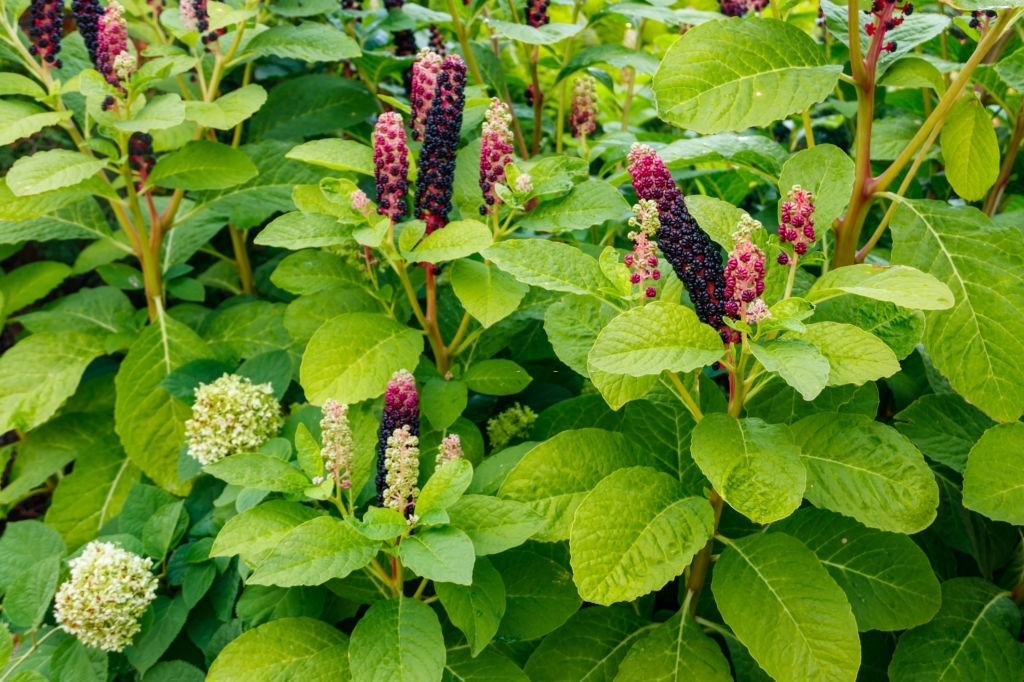 Yes, it appears to be simple, but there is one stipulation: the soil from which the pokeweed is being removed must be light soil; otherwise, this initial natural method will just result in additional pokeweed if the roots are not dislodged. But it’s not just about tugging from the top. Like harvesting a carrot, you must support it from the ground up.

This option will necessitate digging deep till you reach the taproot. This implies you’ll have to dig a 12 inch circle and depth around the plant. This will necessitate the use of a spade, and it will undoubtedly take time. Alternatively, a rototiller can be used to soften the dirt and make digging simpler.

So you’ve dug them all up, but you’ve simply been churning them on the side. Pokeweed is adaptable, and you want to get rid of it permanently. To do so, remove them from the soil (for example, using tarpaulins, sacks, etc.) and place them directly in the sun to dry up and die. Before you put them in a container, burn them, or bury them in the compost, make sure they’re completely dry.

Pokeweed, as previously said, is a survivor, even in the most adverse situations, thus it is important to monitor pokeweed growth on a regular basis. Pull them off as soon as you see them reappear. It’s a good idea to check in every two weeks.

5. Raking The Soil After Pulling Out

You must rake the dirt to disturb the compactness of where the pokeweed used to grow as soon as you are able to pull it out by the root. While this is an optional step, it has shown to be an effective means of preventing pokeweed proliferation, especially if you follow up by watering the soil with a herbicide combination.

Glyphosate has proven to be the most effective pokeweed killer to date. It’s extremely simple to accomplish. You only need to spray or apply a substantial amount straight to the roots of the pokeweed, which means you’ll still have to dig around the plant. This will take some time, but only for the digging, so you may start whenever you like.

How To Combat Pokeweed Over The Long Term

Staying attentive for pokeweed once you’ve successfully dealt with it is the greatest method to keep it out of your garden or yard. In regions where you’ve removed a pokeweed plant, keep an eye on it for up to two years to see whether any seeds or taproot are left behind. Because the berries contain seeds that can be dispersed by birds and animals, keep an eye on your garden and yard to detect a new plant as soon as possible. Put on your gloves and take a young pokeweed plant out by the root, or use the natural or herbicidal techniques described above.

Pokeweed is easier to deal with while it’s young, so don’t hesitate to uproot or destroy new plants as soon as you notice them.

What To Do If You’Ve Been Exposed To Pokeweed

If you’ve come into direct touch with pokeweed, wash the afflicted area with soap and water well. After being exposed to pokeweed, many people acquire an itchy, weeping rash. If you’ve ever experienced a response to poison oak or poison ivy, you’ll recognize a pokeweed rash.

If the rash isn’t too bad, you can treat it at home with calamine lotion and prevent scratching. If the rash is minor and no other symptoms are present, you can also use 1% hydrocortisone cream.

Diarrhea, headaches, stomach discomfort, vomiting, and convulsions are all possible side effects of eating pokeberry. For instructions, contact Poison Control at 1-800-222-1222 or dial 911. Also, if you need to go to the doctor or the emergency department, keep a piece of the plant in a plastic bag for identification.

To summarize, getting rid of pokeweed for good, even if it takes some time and work, is for your own benefit. Nothing compares to putting safety first, not just for you but also for your dogs. These natural methods are doable on your own, so add it to your gardening to-do list. They would, however, necessitate certain special resources, so it’s better to let them come in useful since if you don’t get rid of the pokeweed to the root, it would just return.

Frequently Asked Questions About How To Get Rid Of Pokeweed

Can You Burn Pokeweed?

To dispose of a removed plant, wait till it has totally dried up before burning it. However, burning is a harmful method of disposal. If you burn any portion of the pokeweed that is still fresh, poisons will be released, making you sick.

Once you’ve pulled it out of the ground, let it dry completely in the sun before putting it in a rubbish bag to avoid any problems.

What Happens If I Touch Pokeweed?

Poisonous sap and compounds found in pokeweed can cause rashes, and some of these toxins can enter the circulation. So, whenever you’re working with pokeweed, wear gloves!

Can Pokeweed Kill You?

Pokeweed’s toxins are strong enough to make most people sick or cause a severe, itchy rash, but it’s seldom fatal.

Children and pets, on the other hand, face a substantially larger risk, particularly of serious or deadly kidney impairment. Pokeweed plants should always be removed from any yard, but it’s especially important if you have small children or pets. It’s simply not worth it.

Is Pokeweed Poisonous To Touch?

We’ve previously talked about what pokeweed is and how deadly its leaves, stems, roots, and berries can be. Even a light contact can irritate your skin, induce asphyxia, and poisoning. You must not touch the plant, especially if it is in huge quantities.

Can You Eat Pokeberry?

The cooked root was eaten by Native Americans. To color wine and vinegar in several Asian locations, people add berries. South American natives used to use berries in their pies. However, without sufficient preparations or varying levels of bodily sensitivity, you might become poisoned and die in a matter of minutes. Don’t put your health at danger.

Because vinegar is an acid produced naturally, it burns the roots of pokeweed. If the root still isn’t strong enough, distilled vinegar can be the answer. Spray each pokeweed with a 50/50 solution of vinegar and water. However, as a weed killer, this method is ineffective and may not work on strong old roots.

Yes, absolutely. Roundup destroys all herbaceous plants. This also implies that you must use considerable caution. If common pokeweed grows in close proximity to other plants, Roundup will destroy them as well. I don’t advocate using Roundup in your garden because of the potential for harm to other plants, but you can spray it on pokeweed if it’s growing too close to flowers or crops.

Is Pokeweed Good For Anything?

Pokeweed has been utilized as a medical remedy for Native Americans and as a food source throughout the Western Hemisphere for ages. Anxiety, epilepsy, and neurological diseases were all addressed. I can tell you if it was beneficial or not. Scientists are still studying the properties of pokeweed. They believe its proteins might aid in the treatment of some cancers.

How to Clean Gardening Tools?
How to Start a Hydroponic Garden: Calling All Hydroponics Gardening Beginners
38 Different Types of Gardens For Indoors and Outdoors
Can You Mix St. Augustine and Bermuda Grass?
10 Simple Tips for Maintaining Your Lawn
Agrigenomics: The wave of the future for Agricultural companies?