Can you Dethatch St.Augustine Grass?

St.Augustine grass is a warm-season lawn grass that grows best in tropical and subtropical regions of the world.

It’s characterized by thick, flat blades and is dark green in color. Unlike other kinds of grass, such as Bermuda or Zoysia grass, St.Augustine grass is known for its ability to maintain its vibrancy during a drought for unusually long periods of time.

When it comes to thatch buildup, it can be tricky to notice it during the early stages, particularly in St.Augustine grass as it’s so thick and coarse.

In fact, many people do not even notice they have a problem until the grass underneath can no longer grow, at which point a thatch-removal machine is needed, which causes the grass to become totally destroyed.

So, how can you identify thatch early on, and how can you properly dethatch St.Augustine grass without causing damage?

If you have noticed a buildup of thatch or you simply want some tips on how to spot it, we’re here to help.

From start to finish, this guide will clue you in on how to spot the presence of thatch, what it is exactly, as well as a variety of methods that you can use to get rid of it once and for all. Let’s begin!

In a nutshell, thatch is basically a layer of dead plant that ‘settles’ itself on top of the grass soil.

Thatch can form for several reasons, but the most common reason is due to improper fertilization. When grass is growing properly, it will form healthy new roots and stems as the older ones begin to die. 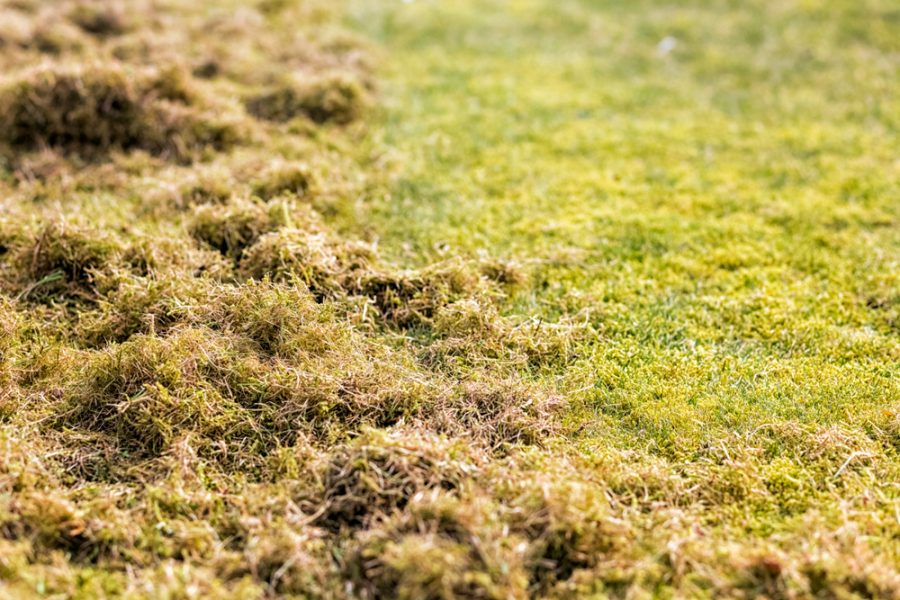 In small amounts, however, thatch is actually a beneficial addition to your grass. A thin layer of thatch will help to hold moisture and return nutrients to the sole. Usually, naturally occurring fungi in the soil are able to destroy thatch thanks to the warm, moist conditions.

However, if too much fertilizer is applied to the soil, it can cause it to grow too fast for the naturally occurring fungi to destroy it, and this is when thatch begins to build up.

In order to keep your thatch to a minimum, follow these quick and easy maintenance steps:

How Can I Identify Thatch?

If you suspect that thatch might be accumulating in your St.Augustine grass, follow these two simple yet effective steps:

Step onto your St.Augustine grass. If it feels springy, coarse, and tough, you likely do not have a thatch problem.

However, if you step onto your St.Augustine grass and it feels soft and spongy (almost like a carpet) this is a clear indication that you have thatch buildup on top of your grass.

Another quick way to determine whether or not there is thatch building on top of your St.Augustine grass is to look at the sides of your turf. If you can visibly see a layer of brown, spongy plant material, then this is a clear indication of thatch. 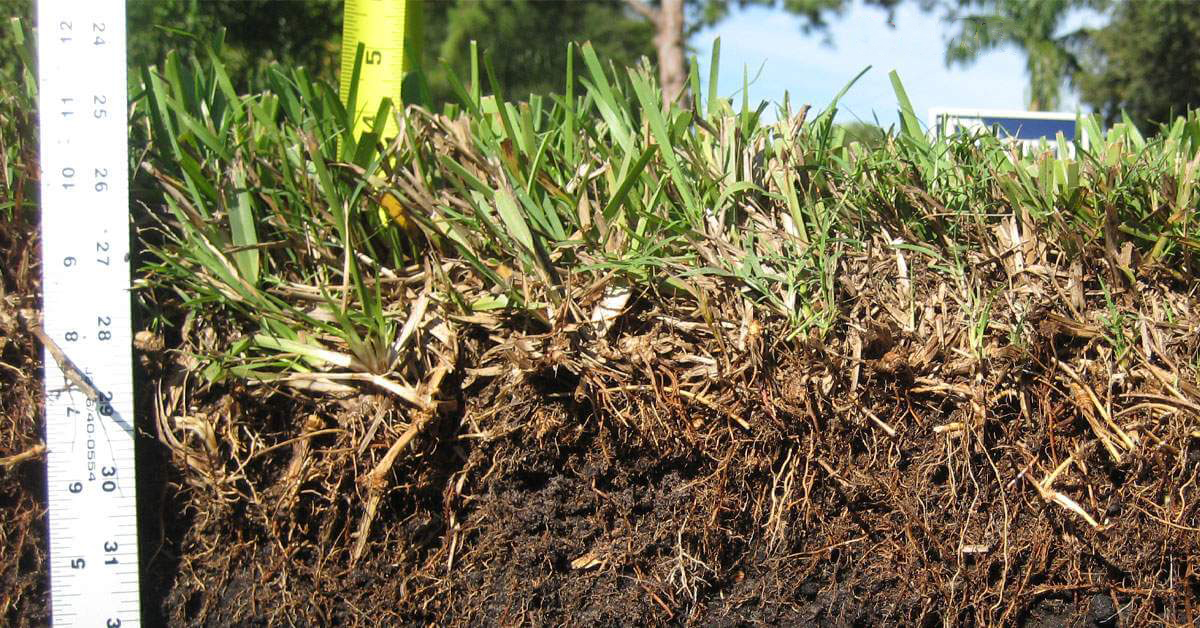 When Can I Dethatch St.Augustine Grass?

Just like all grass, the best time to dethatch St.Augustine grass is when your grass has grown to a length that it needs to be mowed.

For this particular type of grass, that will be around mid to late spring, although colder areas might have to wait until early summer.

If you want to take some extra preventative measures, you’ll be able to run a thatch rake through the soil as it grows, however, don’t forget that a thin layer is beneficial, so make sure that you allow a small layer to accumulate.

Why Do Some People Believe You Shouldn’t Dethatch St.Augustine Grass?

The main reason many people believe that it’s a bad idea to dethatch St.Augustine grass is that by doing so, you run the risk of completely ruining the soil underneath.

Like we mentioned earlier, it can be quite hard to spot thatch in the earlier stages, which is why many gardeners don’t notice the presence of thatch until a considerable amount has formed along the top.

When this happens, a power rake or other kind of thatch-removing machine is required, which can often lead to the St.Augustine grass becoming completely destroyed.

Therefore, when it comes to using a power rake to remove thatch, the grass is still going to be able to re-grow thanks to the rhizomes deep down in the soil.

St. Augustine is a sod-forming grass. The only problem? It doesn’t contain rhizomes.

This means that, if you notice a thatch accumulation and decide to use a power rake, you’re going to be removing nearly all of the top growth, which is how St.Augustine is able to spread itself evenly across the soil bed.

St. Augustine grass will struggle to regenerate itself if it gets cut under 2.5 inches. Due to this, many horticulture professionals are against dethatching as it often leads to a new lawn having to be soiled.

However, it’s worth noting that the use of a power rake is advised against (not so much dethatching) and many people confuse the two.

How To Dethatch St.Augustine

If you’ve discovered that your thatch is over 2 inches thick, we suggest considering reaching out to a professional who will have more advanced equipment to get rid of it.

Big thatch buildup can take more than one removal session, and if you do it yourself and remove too much at once, you’re going to damage the grassroots.

If you want to do it yourself or you only have a moderate amount of thatch to take care of, here are three ways that you can dethatch your lawn:

With a Dethatching Rake

Dethatching rakes are the best for general maintenance of light thatch to moderate thatch build up on smaller lawn areas.

Dethatching rakes are often robust in design and feature short-tined rakes with curved blades that will dig into your lawn and pull up thatch as you rake.

With a Vertical Mower

Vertical mowers, which are also sometimes referred to as verti-cutters, contain vertical blades that are able to slice down through the thatch layer and deep into the soil. By doing so, they pull thatch to the surface.

Verticutters are best for moderate to thick thatch layers and are a more gentle solution to a power rake as the blades adjust, which will allow you to control how much thatch you’re removing at once.

With a Power Rake

Power rakes are motor powered devices with rotating, rake-like tines that are able to powerfully dig into thatch at the soil level and pull it out.

Power rakes work best in situations where thick levels of thatch have developed and a manual thatch or mower isn’t going to be strong enough to get rid of it. The use of a power rake often leads to the grassroots becoming damaged beyond repair and is often the last step to riding thatch that has grown out of control.

Where possible, try to avoid using a power rake on your St.Augustine grass unless you’ve exhausted all other options.

What To Do After Dethatching St. Augustine

So, after selecting your preferred method and your lawn is thatch-free, now begins the healing process! Once you’ve dethatched, your lawn is going to be in shock, and the remaining grassroots will begin to try to grow and repair itself.

As the grass is going to be trying to regenerate and fill in any bare spots in the soil, the best way to help your lawn get off to a flying start is to give it the nutrients it needs to strengthen.

Here are some ways you can help your St.Augustine grass grow:

Though a small layer of thatch can help to retain moisture and ensure that the grass underneath gets all the nutrients needed to stay healthy, too much can have the opposite effect.

Your lawn has likely been starved of nutrients due to a thick thatch layer, and the best way to get it back in tip-top condition is to replenish it with the nutrients it has been missing.

As the thatch has been removed, the soil will be able to absorb the nutrients needed to grow, and we recommend using a slow-release fertilizer mix that is enriched with regenerating ingredients such as phosphorus, potassium, and nitrogen.

As a layer of thatch will be able to provide protection against moisture getting evaporated from the soil. Now that the layer has been removed, water is going to evaporate very quickly until the new grassroots begin to grow and fill in.

Your grass will also be absorbing fertilizer and putting a lot of energy regeneration, so it’s going to be using up more water than it usually would. We strongly recommend continuing to irrigate deep and infrequently, but you might find that you’ll need to irrigate for a longer period of time in order to lower the amount of time between watering.

As a side note, we recommend continuing to vertically mow or regularly mow even after dethatching.

Think of mowing as having the same effect as what happens when you get your hair trimmed - it encourages thicker and faster growth over a shorter period of time!

The goal should be to work your way up to a 4-inch mowing height over time, but we recommend following a 5-day mowing schedule to help your lawn grow as quickly as possible.

Thatch buildup is often caused by incorrect fertilization. When soil is oversaturated by fertilizer, the soil will struggle not only to sprout grassroots but also to promote a quick turnover of dead plant material, which causes the buildup of thatch.

After dethatching, we recommend creating a plan that will help you to organize a step-by-step system whereby you’ll be using the correct amount of fertilizer when the soil needs it, as well as making sure that you remember to mow it every 4-5 days.

In addition to this, we also recommend using compost to topdress your lawn at the beginning and end of each growing season to improve the overall texture, too.

Once you have your healthy St. Augustine lawn, this healthy maintenance schedule will help to prevent the need for any power raking. Additionally, we also recommend making sure that you treat weeds immediately after dethatching.

The open soil is the perfect spot for weed seeds to grow, so don’t let your time spent dethatching go to waste by allowing pesky weeds to take over! In addition to fertilizer, we recommend putting a weed killer across the exposed soil to make sure that no weeds can germinate while your St.Augustine grass regenerates and grows back.