0
So there I was, sitting on the front steps, chin in hand, contemplating the garden. It’s in a bit of a state at the moment, as it often is in August, as things parch and flop and mildew, and I have hit that point of the gardening year where I am eyeing various plants and thinking “Sedums. I could just tear the whole thing out and have a field of Autumn Joy as far as the eye could see.” (This is a dangerous time of year and the best thing to do is to stay indoors for a couple weeks until it passes and it’s time to rip out the dead ends of the vegetable garden.) I was jerked from this mournful state by a hostile buzzing sound. BzzzZZZZZZZzzzzzZZZZZZZZZzzzzz…. This was a scary noise. This was a noise that spoke of stingers and pain and possibly emergency rooms. This was a noise that went straight to the hindbrain. Frankly, it was too scary. This was a sound that was trying too hard. I looked around, and hovering in front of me was Milesia-probably-virginiensis, the yellowjacket hover-fly. “Very funny,” I told it. “I’m wise to your tricks.” It hovered and buzzed at me. If it could have played the theme from Jaws on tiny speakers under its wings, it would have. 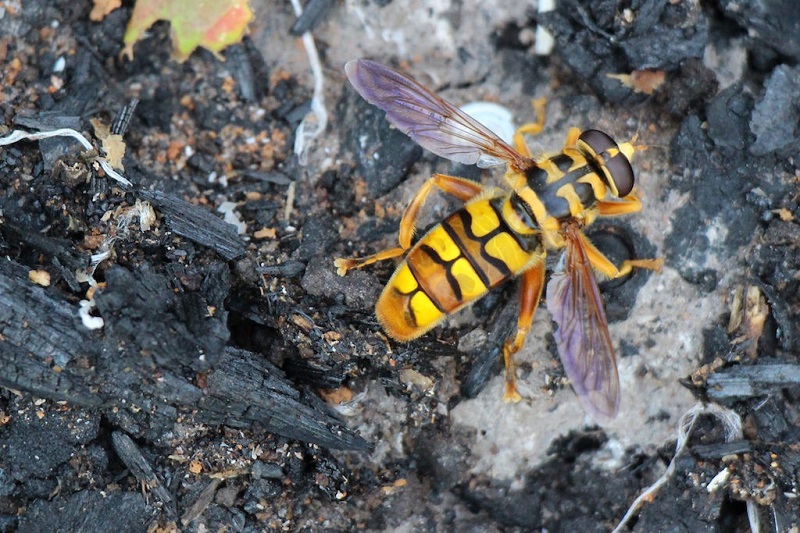 Milesia virginiensis (or possibly M. scutella, although it’s very difficult to tell the difference) is imitating Vespula squamosa, the southern yellowjacket. Yellowjackets, in my experience, don’t make much of a sound when they fly, certainly not the terrifying buzzing of the hoverfly, nor do they hang so spectacularly motionless in mid-air. After fleeing from this buzz once or twice, I finally stopped and looked at what was making it, and saw the unmistakeable eyes of a fly. Unlike yellowjackets, which really are tough customers, the yellowjacket hoverfly is a fairly docile beast, relying on its mimicry to keep away predators. It doesn’t sting, and if it bites, I’ve never heard of it. It likes nectar and it’s not terribly picky, although favorites include Queen Anne’s Lace, a non-native weed in the yard out front, and Rattlesnake Master, a native yucca-like plant I grow in the yard. Larvae feed on decayed wood. These little guys—which aren’t little at all, honestly, and are actually pretty damn big for a fly—are common in my yard. They like to hang in the air in front of humans, no idea why—curiosity? They think it’s funny? There’s a bit of Southern folklore that calls them “news bees” and claims that when they hover in front of someone, they’re “giving them the news.” In the Appalachians, more specifically, they mean that good news is on its way. (I have never actually gotten any news from any member of Milesia, other than “You have hoverflies in your garden,” but maybe I just don’t speak Fly. If they are actually omens of good news, then my life is in for a stretch of unrelenting joy any time now.) Folklore aside, there’s not a lot of information lurking around about these guys. They’re one of a vast swarm of insects that got described and now exist quietly (or loudly, in this case) without, apparently, anybody devoting their lives to studying them in any great detail. I couldn’t tell you if they were rare or common (I lean toward common, but what do I know?) if their numbers are declining or increasing, if they do anything exciting. They don’t appear to have a conservation status at all. Getting the hoverfly to hold still in midair is easy—getting it to hold still long enough to get the camera focused on one is extremely hard, which is why the only shot I’ve ever managed is when one perched momentarily on the Canada ginger. As for how you could attract them to your garden, or if, being generalists, you can attract them at all, or if they just show up on their own—I haven’t a clue! But nectar, including Rattlesnake Master and Titi, probably can’t hurt. As for why you should…well, heck, who doesn’t like good news?
Pin
Tweet
Share
234 Shares