A propane torch is a powerful and handy tool that serves various functions. With its commendable firepower, one could easily get rid of pesky weeds invading the lawn. Likewise, it removes snow and ice in no time to keep your property neat during the winter season.

However, this is also a dangerous tool that needs to be used with great care. To keep you safe while also performing with ease, only the best propane torch should be acquired.

Benefits Of Using A Propane Torch​

Firstly, one of the most important uses of a propane torch is to immediately remove weed﻿s in one’s property. Instead of exerting a considerable amount of time and effort to dig or pull out the harmful weeds, you can just torch them. 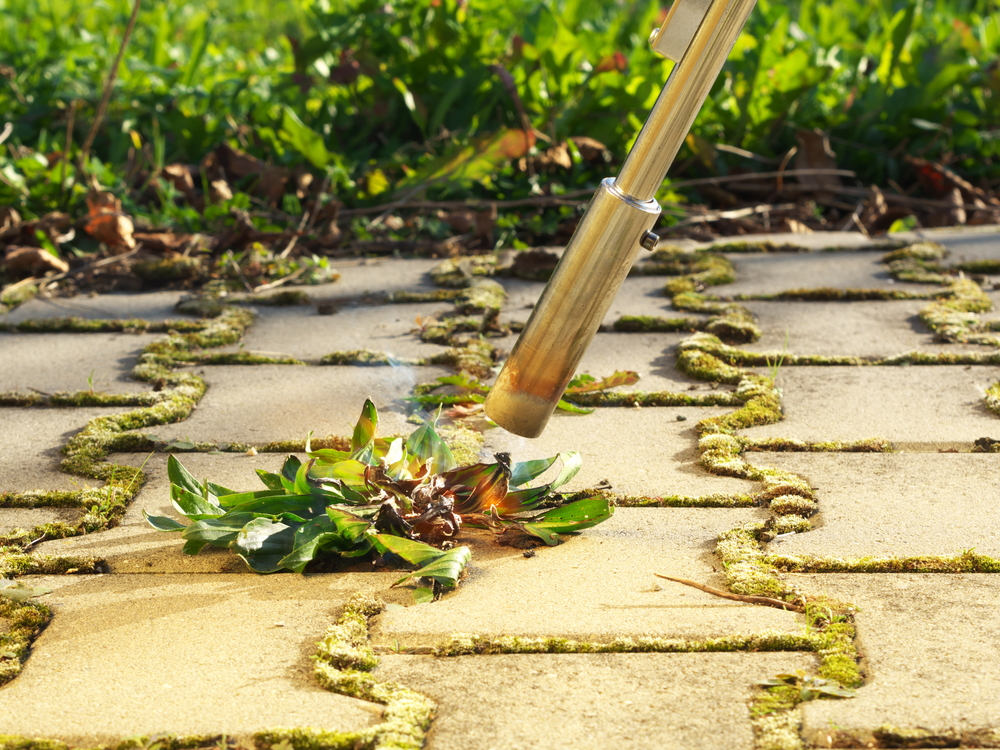 ​This is a weed removal method that can take mere seconds due to flames that reach a temperature of 2,000 degrees Fahrenheit. It even stops chemical contamination since you wouldn’t have to rely on herbicides filled with various chemicals.

​Secondly, aside from weed removal, a propane torch can also be utilized for burning buses and twigs. It’s clearly one of the most efficient ways to clear them out. Consequently, you can use this tool to get rid of sticky oil and grease that have ended up on your driveway or sidewalk. As for people who love to grill on the weekends, a propane torch will readily burn the charcoal so you can prepare barbecue﻿s and hot dogs in no time.

​Thirdly, a propane torch will come in handy during winter when the pipes become frozen. This tool can thaw the pipes to keep the water flowing with no issues. Even your animals can benefit from this torch since it can sterilize the cages from rust.

​Features To Consider When Choosing The Best Propane Torch

In order to get the right propane torch, there are several things you need to consider. With these guidelines, you’ll be making an informed decision as a buyer.

Propane torches are easy to find in stores dedicated to gardeners and homeowners. Still, they do vary in price – and they are not cheap. You could be spending around $50 for a propane torch, and that does not usually include the gas tank and the propane itself. You’ll be spending around $20 to get a five-gallon gas tank while the cost of propane will depend on how many times you’ll be using the torch.

A propane torch should not be difficult to handle even if you’re just using it for the first time. Thus, it’s best to find one that includes an ignition switch. This will ensure that the flame arising at the tip won’t suddenly go out of control and harm the user. With an ignition switch, the spark goes straight into the torch. Thus, you will only have to turn the propane on and flick the switch.

Before you buy a propane torch, make sure that starting the flame won’t be such a hassle. After all, a variant, which requires you to use a match, will put your hands dangerously near to where the fire will start.

Some propane torches are designed to seamlessly connect to propane tanks with a capacity between 14 ounces to 16 ounces. Thanks to this considerably small capacity, you could carry and move the torch with relative ease. However, the downside is that the tank could quickly go empty.

In contrast, you could get a propane torch that attaches itself to sizable tanks. While this will give you a long time to use the tool, the torch will also need an extension hose that inevitably limits your reach. In addition, carrying a large tank can make you feel tired fastly.

Some propane torches have built-in valves to help the user to modify just how much flame is generated at a given moment. You could use the lowest setting if you only need a small flame for dealing with a few weeds in your lawn. Having a valve is necessary for using the propane torch efficiently.

A valve can save you a lot of money in the long run since you’re using the appropriate amount of propane. Still, this will also allow you to have a huge flame in case you need it as soon as possible. You can actually use five gallons of propane within an hour if the torch has a three-inch tip and you choose the highest valve setting.

This allows you to control which plants the flame would come in contact with. You wouldn’t want your prized flowers and crops to succumb to fire just because they were located near the weeds you were lighting on fire.

Alternatively, you should get a propane torch with a tip ranging between one and a half inches to three inches in diameter if you have to destroy a huge area filled with weeds. These large tips known as torch bells, which will release big flames to quickly burn down all the harmful plants in your property.​

The first propane torch we have comes from Hot Max. You don’t have to assemble anything once it arrives, so you can use it immediately if you want. There’s a single flint striker so you wouldn’t need to use a match to light it. With a 500,000 BTU, this model is clearly meant for industrial and heavy-duty purposes. This can melt tar, asphalt, snow, and ice while also heating metals for welding purposes.

Moreover, this propane torch lets out big flames without using any caustic chemicals. You wouldn’t have to worry about accidentally harming the sensitive plants in your property. Since this uses large-capacity liquid propane tanks, the Big Max 500G uses a 10-feet long, hose with a 350 psi rating and is listed by the Underwriters Laboratories (UL).

There’s a lengthy molded handle that Hot Max trademarked to improve user comfort. Since the flames can get big real quick, a sturdy valve made out of solid brass helps the owner to adjust the flames accordingly. There’s also a POL safety valve that’s designed to control the amount of propane gas flowing.​

Consequently, this variant includes a squeeze valve for controlling the flame while the rubber grip handle ensures that you won’t lose control and harm yourself in the process. Another handy feature of this Red Dragon propane torch is the spark lighter. You wouldn’t have to put yourself at risk since the lighter will easily create the needed flame.

With the sizable flame of the Red Dragon VT 21/2-30SVC, you could clear out every single weed located in your lawn, sidewalk, and driveway. This is a heavy-duty propane torch that is compatible with any propane cylinder that has 20-pound carrying capacity at the least.​

Up next, we have another propane torch from Red Dragon. However, there are significant differences between the VT 21/2-30SVC and the VT 2-23C Weed Dragon Propane Vapor Torch Kit. For one, this propane torch comes fully assembled. You can use it the moment it arrives as long as you have propane available. Secondly, VT 21/2-30SVC has a 400,000 BTU propane torch while this one settles for 100,000 BTU.

With a significantly lower BTU, does this mean that the Red Dragon VT 2-23 C Weed Dragon is a completely inferior variant? No, since this propane torch is specifically designed to remove weeds in the lawn. It can still melt snow and ice while also heating tar and asphalt, but it’s primarily meant for landscapers and garden owners who require an effective weed control method. In fact, this got the Seal of Approval from the National Home Gardening Club.

It has a two-inch bell and the complete length of the torch measures at 27.5 inches. The handle is 23 inches long while the gas hose is ten feet long. A 20-pound propane tank would do well with the Red Dragon VT 2-23 C Weed Dragon, especially with the hand-tighten tank fitting. Other features of this model include a plastic grip, a UL-listed regulator, a needle valve, and the usual spark lighter.​

Moving from two Red Dragon variants, we have the BernzOmatic 19425 JT850. Like all other entries, this one is designed to quickly put weeds and other unwanted plants up in flames. This can also be used to fix asphalt cracks on the pavement while also melting both ice and snow. Additionally, the BernzOmatic 19425 JT850 has a trigger-start feature for a quick activation.

As expected, you could adjust the flame output using a control valve. Aside from the usual propane gas, this BernzOmatic torch can even utilize MAPP gas, which is commonly used for welding and soldering. Its overall reach is at 36 inches, and the whole product is manufactured in the United States.

Lastly, we have this propane torch from Supershop. This torch wand, as the brand likes to call it, has a valve specifically meant for controlling the flow to prevent any leaks. There’s a turbo-blast trigger to maximize the flame and heat output in no time, and it works with any standard propane tanks.

The steel tip has a diameter measuring two and 3/8 inches while the 6.5-foot hose has a working PSI of 350 pounds. The Supershop Torch Wand comes in either orange or blue. The package already includes 17-millimeter and 19-millimeter wrenches. Finally, a Piezoelectric igniter starts the flame as safely as possible.

In the end, our favorite choice is none other than the Red Dragon VT 2-23C Weed Dragon Propane Vapor Torch Kit. Despite having just a 100,000 BTU, this is what we’ve been looking for as homeowners and lawn owners. We do not have to waste time putting the parts together since it comes fully assembled. If you are new to using a propane torch, the instruction manual offers all the information you would need.

​We just have to hold the plastic yet sturdy grip and ignite a flame with the spark lighter to begin operations. The handle might not be long enough for everyone, but that’s a minor issue.

This tool is powerful and precise enough to get rid of both huge and narrow sections of weed. As for snow and ice removal, this Red Dragon propane torch does the job well too. No wonder it got the National Home Gardening Club’s Seal of Approval.

We hope that you learned a lot from our guide. A propane torch is a handy tool that allows people to quickly remove weeds without using herbicide. Moreover, it can clear out snow and ice during the winter season. As long as you consider all the factors before buying, you should get a great propane torch that will work perfectly in your lawn.

If you have any queries, do give us a comment.​ 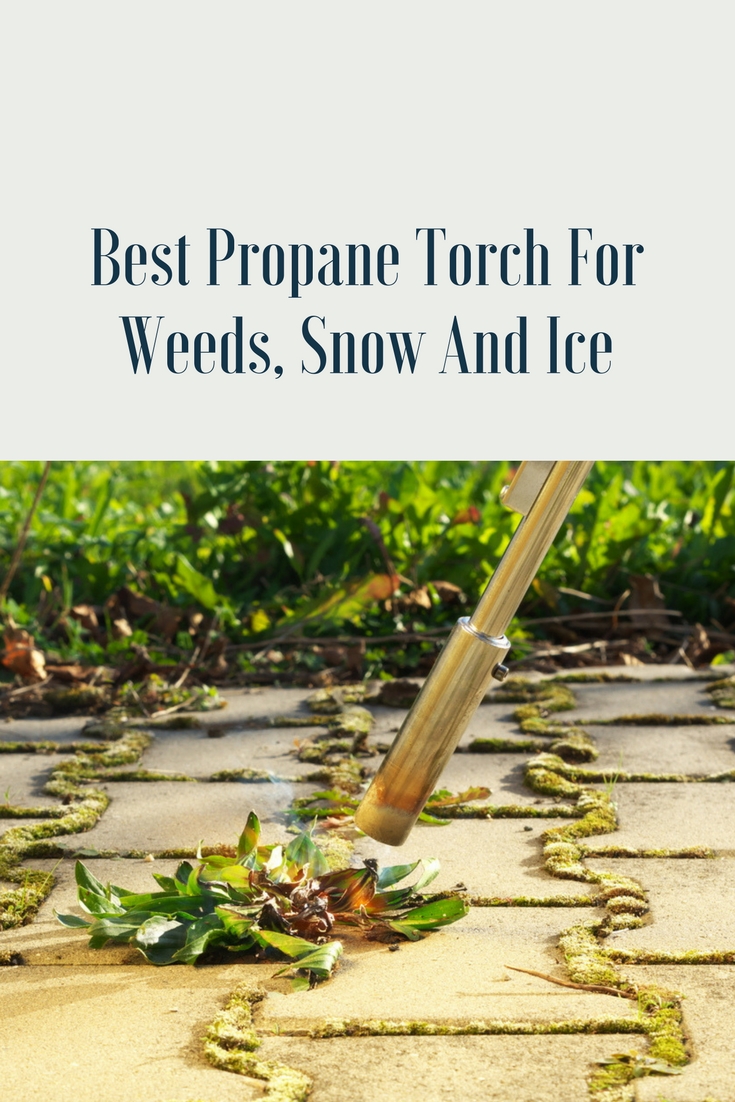